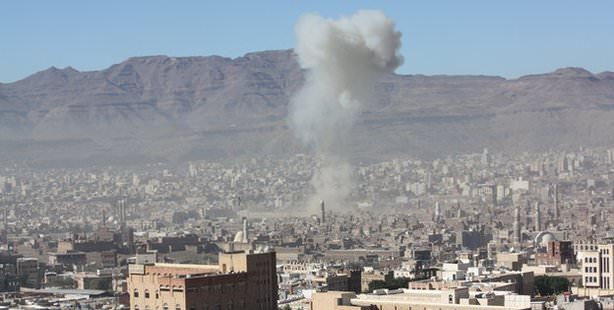 Besides the two road side bombs blasted near the Defense Ministry and Central Bank, also a mortar bomb landed in a district housing the French embassy and the home of former President Ali Abdullah Saleh, who was overthrown by massive street protests in 2011 as Yemen was heavily under the influence of the Arab Spring.

Four people were wounded in the mortar blast, which damaged three buildings and destroyed two cars, witnesses said. An activist, Farea Al Muslimi claimed there were tens of ambulances carrying wounded people to the hospitals in a twitter post. One resident reported hearing gunfire after the explosions, but the details were sketchy. An unidentified gunman abducted a British national on Monday, witnesses and a police source said.

The British embassy informed that the British national worked for an oil company. Witnesses told Reuters that four armed men forced the man out of his car and into a waiting vehicle in the Hadda district of the capital city of Sanaa. Yemeni tribesmen said on Sunday, they had abducted a German man on Friday to press their government to free jailed relatives. In December, a suicide bomb and a gun attack near the Defense Ministry killed 52 people.