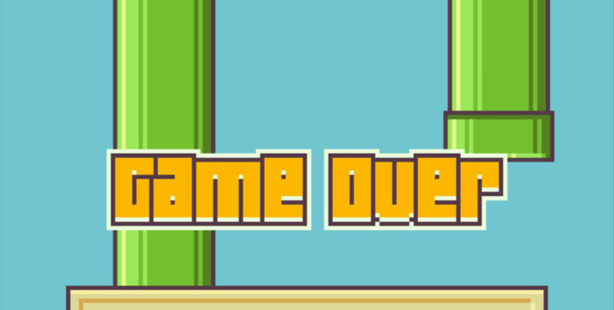 Vietnamese developer Dong Nguyen's phenomenal game Flappy Bird has a simple interface featuring vintage 8-bit graphics. The game seems to be one of the easiest; it just needs tapping on the screen to keep the cute bird flying through the green pipes. The point of the game is to achieve the highest score, but even scoring two or three points is quiet challenging on the notoriously difficult game. The free game was downloaded more than 50 million times on iOS and Android markets after its release. It is reported that the game generates about $50,000 per day via ads.

The developer Nguyen removed his game from mobile markets after his tweet saying "he cannot take this anymore." Nguyen gave 22 hours notice to players before removing the game from Android and iOS markets, yet the clones of game have already taken their places on the market for the late-comers.

Flappy Bird received strong criticism from some, saying the developer copied the background of the famous Nintendo game Super Mario and was hence despised for the greatest recognition. Yet some game experts express their eulogies to the Flappy Bird claiming it is designed with an understanding of the true nature of game strategy that keeps players trying defeat upon defeat, lured by the feeling of frustration and uncontrollable urge to continue. It is considered to belong to the oldest genre of arcade games and to be in line with game design mogul Shigeru Miyamoto's concept.

Although the Flappy Bird took its final bow, other games developed by Dong Nguyen – all designed in the same retro style – are still available on his website, dotGear studios.