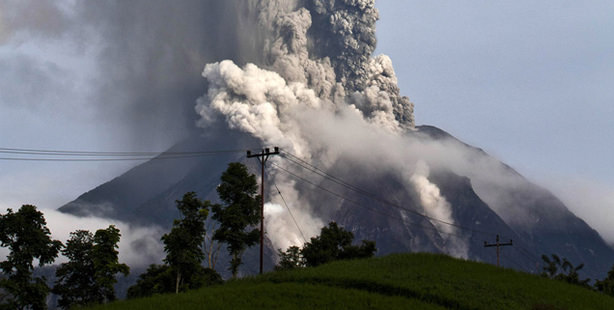 The 1,731-meter-high (5,680-foot-high) volcano erupted late on Thursday night on the heavily populated Indonesian island of Java, sending a huge plume of ash and sand 17 km (10 miles) into the air. The cloud from the eruption was seen as far as 9 km to the west, and forced the shutdown of airports at Surabaya and the cities of Yogyakarta and Solo.

Muhammad Hendrasto, head of Indonesia's Volcano Monitoring Agency, said the mountain erupted violently about 90 minutes after authorities raised the alert status to the highest level. The explosive overnight eruption of the volcano could be heard up to 200 kilometers (125 miles) away.

At least two people were reportedly killed when the roofs of their homes could not hold the weight of the ash and debris. The National Disaster Mitigation Agency spokesman Sutopo Nugroh said the agency was still trying to confirm reports that two people had died.

The agency later said, ''the cloud was dissipating and that the volcano was no longer erupting.'' The eruption caused minimal damage to buildings, Sutopo said, but had left 3 to 5 cm (1 1/2 to 2 inches) of ash and sand on roads.

"We don't have data yet on how many people have been evacuated in total. We can say 200,000 people were affected. We received reports of deaths, but we have not verified them yet," the agency stated.

An estimated 200,000 people live within a 10 km radius of Mt Kelud, one of nearly 130 active volcanoes in the world's fourth most populous country.

President Susilo Bambang Yudhoyono wrote in a message on Twitter that he planned to visit the area near Kelud.