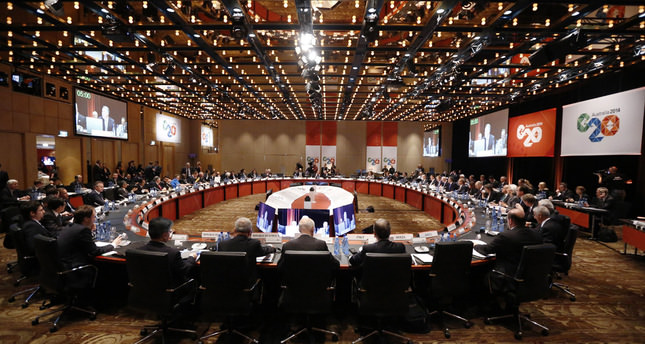 G-20 finance ministers meeting in Sydney agree to measures they say could add an additional two percent to global growth over the next five years, adding over $2 trillion in real terms to the world economy

The Group of 20 (G-20), a body comprised of the world's top economies, set a goal of generating more than $2 trillion in additional output over five years while creating tens of millions of new jobs in a move signaling optimism that the worst of the economic crisis and subsequent austerity measures will soon be in the past.

The final communique from the two-day meeting of the G-20 finance ministers and central bankers in Sydney said they would take concrete action to increase investment and employment, among other reforms. Countries represented in the group account for around 85 percent of the global economy. "We will develop ambitious but realistic policies with the aim to lift our collective gross domestic product by more than two percent above the trajectory implied by current policies over the coming five years," the communique read.
Australian Treasurer Joe Hockey, who hosted the meeting, sold the plan as a sign of increased cooperation in the G-20. "We are putting a number to it for the first time - putting a real number to what we are trying to achieve,"

Hockey told a news conference. "We want to add over $2 trillion more in economic activity and tens of millions of new jobs."
The G-20 finance ministers and central bank governors also said they "deeply regret" that International Monetary Fund (IMF) reforms stalled and that the United States is yet to ratify them. "Our highest priority remains ratifying the 2010 reforms, and we urge the U.S. to do so before our next meeting in April," they said in a final communique. The deal was also something of a feather in the cap of Hockey, who spearheaded the push for growth in the face of some skepticism, notably from Germany. "What growth rates can be achieved is a result of a very complicated process," Germany's Finance Minister Wolfgang Schaeuble said after the meeting. "The results of this process cannot be guaranteed by politicians."

Australia is acting as president of the G-20 this year, following Russia in 2013 and ahead of Turkey next year. While shifting the focus to reforms that would lift and sustain global growth in years to come, the group acknowledged monetary policy would need to "remain accommodative in many advanced economies and should normalize in due course."
The growth plan is borrowed wholesale from an IMF paper prepared for the Sydney meeting, which estimated that structural reforms would raise world economic output by about half a percent each year over the next five years, boosting global output by $2.25 trillion.
The IMF forecasted global growth at 3.75 percent for this year and four percent in 2015, but there is currently no road map on how nations intend to reach this figure or repercussions if they never arrive. Instead, the global leaders set the goal now and later each country will develop an action plan and a growth strategy for delivery at a November summit of G-20 leaders in Brisbane.
Agreeing on any goal is a step forward for the group. Financial markets were wary of the possibility of friction between advanced and emerging economies, but nothing suggested the meeting would cause ripples.