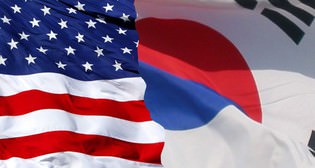 by Feb 25, 2014 12:00 am
The United States and South Korea began annual military exercises Monday as reunions of families separated by the Korean War continued in North Korea. The exercises Key Resolve and Foal Eagle went ahead despite demands from Pyongyang that they be stopped.
North Korea earlier threatened to scrap the reunions running between Feb. 20 and 25 if the manoeuvres were not called off, but later agreed to let the meetings go ahead. The reunions are the first since 2010.