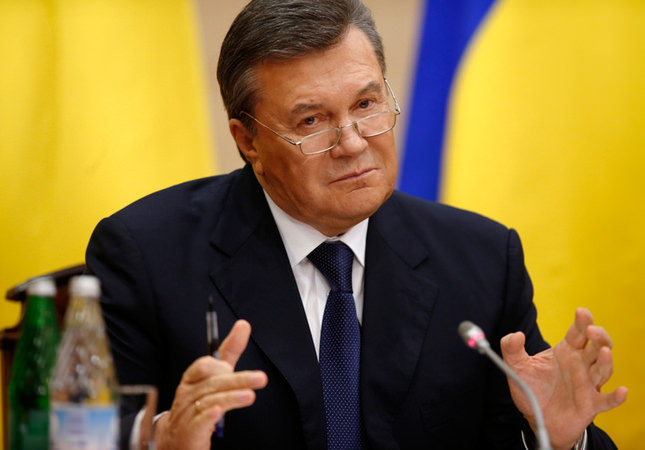 by Feb 28, 2014 12:00 am
Swiss authorities said Friday they have ordered a freeze on the assets of ousted Ukranian leader Viktor Yanukovych and his multi-millionaire son and launched a criminal probe into alleged money-laundering by the pair.

Yanukovych and his coal magnate son Oleksandr are on a list of 20 Ukranian officials including former ministers being targeted by the authorities in Switzerland.

Liechtenstein followed suit and also froze the bank accounts of the same officials.

Austria announced it also had moved against 18 Ukrainian officials suspected of violating human rights and involvement in corruption.

Austrian media reported the group included former ministers but said it was not known if Yanukovych or his family had any funds in the country.

Yanukovych, 63, fled to Russia after the bloody culmination of three months of protests by anti-government demonstrators.

Ukrainians, grappling with an economy on the brink of default, were shocked by the breathtaking opulence of Yanukovych's vast country estate which was flung open for all to see when he went into hiding on Saturday.

Switzerland, Liechtenstein and Austria are popular havens for the -- sometimes ill-gotten -- fortunes of the rich and powerful.
"The Federal Council wishes to take all measures necessary to avoid the risk of any misappropriation of financial assets of the Ukrainian state," the Swiss government said in a statement.

It is unclear whether Yanukovych himself has funds in Switzerland, but Oleksandr opened a branch of his Management Assets Company (MAKO) in Geneva in late 2011.

The 40-year-old dentist and businessman has amassed a personal fortune of around half a billion dollars (about 365 million euros) in the past three years alone, according to a report in the Swiss weekly L'Hebdo.

His Ukrainian conglomerate reportedly controls nearly half of his country's coal output, and around a third of its electricity production and distribution.

The Geneva branch of the business is run by a businessman of Uzbek origin, who also runs a firm called Partefina, listed with the same address.

That company is listed as a so-called "family office" -- a term used for firms specialising in the management of large family fortunes.

According to L'Hebdo, Partefina is owned by Ukrainian billionaire Rinat Akhmetov, a supporter of Yanukovych who also has offices in Geneva.

The Swiss government said it was banning the sale or disposal of any assets of Yanukovych and his entourage to prevent them being taken out of Switzerland.

"Should such assets subsequently be proved through criminal proceedings to have been obtained illegally, they can be returned to Ukraine following criminal conviction of the former leaders and their entourage," it said, adding that it was cooperating with the Ukrainian authorities in the process.

The attorney general in Geneva also announced that a prosecutor and the judicial police's financial brigade had launched a raid on Thursday on the offices of a company run by Olexandr as part of a money laundering probe.

Transparency International Ukraine hailed the swift action by Bern, Vienna and Vaduz, and urged other governments in Europe and the United States to follow suit.

"It is important that governments move fast to freeze assets, because someone who wants to hide money can set up an anonymous shell company online in less than 10 minutes," organisation head Oleksii Khmara told AFP.

Ukrainians in Switzerland, some of whom took to the streets Wednesday to demand the country freeze any Yanukovych assets, have "mixed feelings" about Friday's announcement, former UN official Bohdan Nahaylo told AFP.

"On the one hand we feel that this is the right move, but secondly we feel that this is quite late in the day. One would assume that some of the people who have been hiding their money here, laundering money, probably have moved it by now," said the British citizen, born to Ukrainian parents.

Meanwhile, Austria, which has resisted European efforts to improve transparency in its banking sector, is considered in Kiev as a financial safe haven for Yanukovych-linked oligarchs.

Vienna said its asset move was taken as a preliminary security measure until targeted sanctions that the European Union agreed to slap on Ukrainians take effect.

The bloc on February 20 agreed to a travel ban and asset freeze on Ukrainians with "blood on their hands" amid worsening violence in Kiev, but did not name those affected.
In Brussels Friday, European Commission spokesman Olivier Bailly said EU working groups were looking at the sanctions against Ukraine but that there has been "no final decision by the member states" on who should be subject to the restrictions.