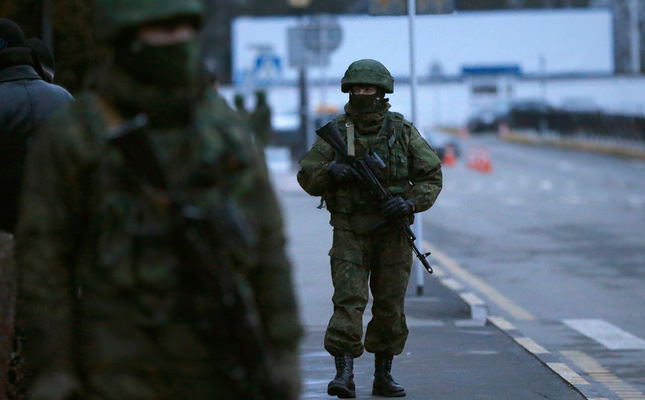 Fears of a conflict breaking out on the Crimean peninsula in southern Ukraine intensified after Ukraine accused Russia of occupying two airports there, days after the Yanukovych administration was overthrown

Fears of a conflict breaking out on the Crimean peninsula in southern Ukraine intensified after Ukraine on Friday accused Russia of occupying two airports there. A group of armed men, believed to be members of a pro-Russian militia group called Berkut, seized the airport in the region's capital city, Simferopol, in the early hours of Friday.

Around 50 armed men in military uniform arrived in three trucks without license plates and surrounded the domestic flights terminal before moving onto other parts of the airport.

The armed men, described by Ukrainian Interior Minister Arsen Avakov as Russian naval forces, also took control of a military airport near the port of Sevastopol, where the Russian Black Sea Fleet has a base.

Russia denied the accusations, saying that it had not deployed troops nor had any role in blockading the airport. It conceded, however, that it had stepped up measures by "anti-terror units" to protect members of its fleet stationed in the region.

Ukraine's interim President Oleksandr Turchynov, who was appointed on Sunday to replace his Russia-friendly predecessor Viktor Yanukovych, called a special meeting with his security chiefs in response to the news.

The airport seizures came one day after about 100 pro-Russian militias took over the Crimean parliament and raised the Russian flag over the building. The airport was said to be continuing operations.

Russia held a series of military drills in the west of the country near Ukraine, deploying 150,000 troops, 880 tanks and 90 military planes to engage in what it referred to as "combat readiness" exercises.

Turchynov warned Russia to keep its fleet inside their bases, adding that any troop movements outside of the agreed territory would be considered a form of "military aggression."

The Crimean peninsula and its port of Sevastopol are a potent symbol of Moscow's ability to extend its influence via the Black Sea. Though Ukraine has jurisdiction over the peninsula and the port, Moscow negotiated a lease of Sevastopol in the 1990s for the use of its Black Sea Fleet.

In 2010, Yanukovych, who was deposed over the weekend and is now reported to be in Russia, extended Russia's access to the port until 2042 in return for a pledge from Moscow to invest in the cash-strapped region. "What is being done in Crimea is completely planned in Moscow," said Zafer Karatay, the Turkish Representative to the the Mejlis of the Crimean Tatar People. "It is the realization of the aim to annex Crimea to Russia with the support of Russian military troops in Crimea. Supporters of Russia in Crimea have always attempted to annex Crimea to Russia at any opportunity since the dissolution of the Soviet Union. Yet, they have not achieved anything thanks to the determined stance of Crimean Tatars under the leadership of the Mejlis of the Crimean Tatar People. Now, they are trying to do it with undue haste."

Karatay described the difficult conditions under which the region's parliament was working. "The parliament convened on Feb. 25, 2014, through the efforts of [Vladimir Konstantinov, the speaker of Crimea's parliament]," he said. "However, they could not reach any decisions as thousands of Crimean Turks gathered for demonstration.

Terrorists composed of 'berkut' officers were taken into the Parliament in the morning of Feb. 26, then parliamentarians came in under the shadow of these men. Eventually, the decision of the referendum [to secede] was made. According to Ukrainian constitution, this decision has to be approved by the Ukrainian Parliament first. Now they are trying to create a state by mobilizing Russian troops without going through proper protocol."

The region has a substantial Turkic population. The population was once much higher, but decades of ethnic cleansing and discrimination caused many to leave. "After the Crimean Khanate was destroyed in 1783 and annexed to Russia, a systematic ethnic cleansing was conducted," he said. "One million Crimean Turks were compelled to migrate to Anatolia from 1783 to 1923. The Soviet regime continued to follow its policy...and exiled all Crimean Turks on May 18, 1944.

Now, the number of Crimean Turks that could return to Crimea despite all difficulties and inhibitions is nearly 300,000. Russians immigrated into Crimea after the exile of Crimean Turks and are the majority today. The Russian people have been living in Crimea for nearly 40 years.

So, residents who have been in Crimea only 40 years are putting the future of Crimea to a referendum. "This is obviously extorting the rights of the historical owners of Crimea, namely the Crimean Tatar. A theft is being performed with so-called modern and democratic ways. It is impossible for the Crimean Tatar to accept such thing. Crimean Turks under the leadership of Mustafa Kırımoğlu struggled against the Soviet regime, of which the whole world was afraid. They will go on struggling.
Yet, this time they are not alone."

Meanwhile, Ukraine's parliament urged Moscow on Friday to cease any moves that could undermine the country's territorial and adopted an appeal for Russia to "stop moves that show signs of undermining national sovereignty and territorial integrity [and] reject support for separatism in Ukraine, of any form."

Yanukovych insists 'not overthrown', will fight on

Deposed Ukrainian President Viktor Yanukovych insisted yesterday in his first public appearance since fleeing to Russia that he had not been overthrown and would continue to fight for the future of Ukraine.

Yanukovych told reporters in the southern Russian city of Rostov-on-Don that he had been "compelled to leave" Ukraine after he received threats to his security. "I have not been overthrown by anyone, I was compelled to leave Ukraine due to an immediate threat to my life and the life of those close to me," he said, sitting at a desk alongside a senior editor from the ITAR-TASS news agency in front of three Ukrainian flags. "I intend to continue the fight for the future of Ukraine against those who try to saddle it with fear and terror."

Yanukovych, who fled after being impeached by parliament on Saturday, slammed the anti-Kremlin and pro-EU forces who have now taken power. "Power in Ukraine has been taken by nationalist, pro-fascist young people who represent the absolute minority of people in Ukraine." "This is anarchy, terror and chaos," he added.

But Yanukovych, 63, speaking in Russian, said he wanted to apologize for leaving Ukraine in its current state. "I am ashamed. I want to say I apologize to the Ukrainian people for what happened in Ukraine and that I did not have the strength to keep stability."

He blamed the "irresponsible policies" of the West for the crisis in the country and said he would not take part in an "illegal" presidential election planned by Ukraine's new leadership for May 25.