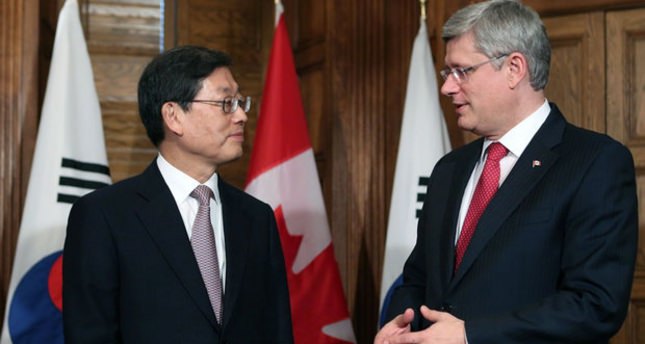 by Associated Press Mar 12, 2014 12:00 am
Seoul - South Korea and Canada reached a free trade agreement yesterday that the two governments hope will boost exports and investment. After more than nine years of negotiations, the two countries said they would remove tariffs on most goods within a decade of the pact taking effect.

Canada agreed to eliminate tariffs on South Korean autos within two years of the deal being ratified. South Korea will reduce tariffs on Canadian beef over 15 years, according to South Korea's statement. The deal was announced after South Korean President Park Geun-hye held talks with visiting Canadian Prime Minister Stephen Harper in Seoul. It is Canada's first free trade agreement with an Asian nation. Much of Canada's trade is with the United States due to a North American free trade area formed in 1994 with the U.S. and Mexico.