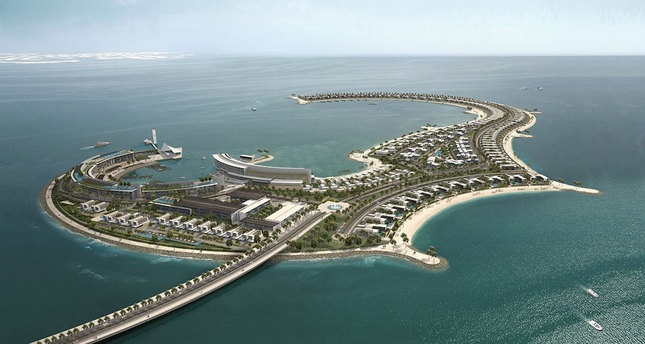 by daily sabah Mar 17, 2014 12:00 am
ISTANBUL – Rashid Al Maktoum on Saturday approved plans to construct a bridge to connect the $1.6 billion (TL 3.54 billion) Bluewaters Island project with the mainland. According to Arabian News, Dubai's transport authority said the AED 500 million (TL 301 million) construction contract for the bridge, which will have two lanes in each direction and will be 1,400 meters long, will be awarded in the second quarter of this year.

The Bluewaters Island project, which will be built off the coast of Jumeirah Beach Residence, was announced 12 months ago and has been described as one of the largest tourism hotspots in the world by developers Meraas Holding.

Mattar Al Tayer, chairman and executive director of the Roads and Transport Authority (RTA), said, "The new Bridge will serve the needs of the Bluewaters Island featuring an array of spectacular waterfronts which promise to be the most attractive in the UAE...The Island is set to attract about 3 million visitors every year. "The project will be served by a monorail system to lift visitors from the metro station to the festivities area, a footbridge will be constructed to link the luxury Island with the waterfront of the Jumeirah Beach Residence, and a cable car to shuttle visitors from and to the entertainment zone," added Al Tayer.

A bespoke souq encircled by a promenade will contain alfresco dining outlets serving a variety of cuisine, retail stores and a food hall offering fresh produce in a traditional market atmosphere.

In other news Abu Dhabi and the central bank of the United Arab Emirates have agreed to refinance $20 billion of debt that was extended to the Dubai government as emergency aid during its financial crisis and comes due this year, the state news agency said yesterday.
The debt is being rolled over for five years at a 1 percent annual interest rate, WAM said in an official statement.

The debt comprises a $10 billion loan which was offered to Dubai by the Abu Dhabi government through two state-owned banks and $10 billion of bonds which Dubai issued to the UAE central bank.