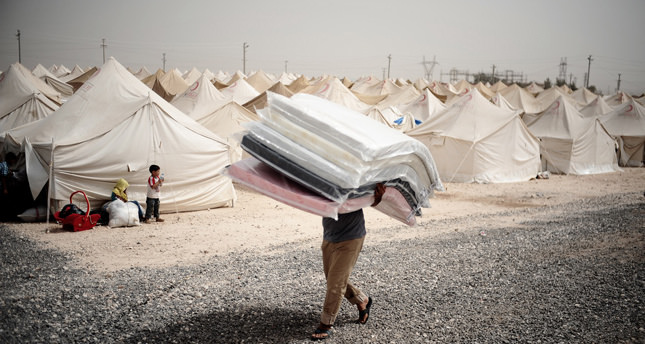 by AA Mar 18, 2014 12:00 am
ŞANLIURFA – The number of Syrian refugees in camps in Turkey has exceeded 220,000 according to Turkey's Disaster and Emergency Management Presidency (AFAD). Turkey hosts refugees in 16 tent cities in addition to a temporary reception center and six container cities in 10 of its provinces. Most of them are located in areas along Turkish-Syrian border.

The total number of Syrian refugees in camps in Turkey reached 220,117 in mid-March, as the conflict in their homeland has entered its fourth year. At least 464,185 Syrians have entered Turkey since the onset of the conflict in Syria in March 2011, while 244,008 Syrians have returned to their country, according to latest official figures.

Following the Geneva II talks under the mediation of United Nations-Arab League Special Envoy Syria Lakhdar Brahimi earlier this year, the warring sides could not agree on a deal to end fighting. While the opposition has demanded that Syrian President Bashar Assad step down, the regime in Damascus is calling for the expulsion of "terrorist gangs," a term it uses for foreign fighters and radical groups among rebels.
In addition to providing shelter to Syrians, Turkey also has worked to address their various needs. To that extent, a store was opened in the southeastern Turkish province of Şanlıurfa to hand out free clothes for impoverished Syrians. The store, jointly operated by the local governorate in Akçakale, Turkish Red Crescent and other nongovernmental organizations, delivers clothes to Syrians. Syrians simply obtain a shopping card from a local authority and receive the clothes they need from the store for free. About 50 Syrians apply for clothing deliveries daily. The store is the first of its kind for Syrians in Turkey. Akçakale hosts about 30,000 refugees in a camp in the district.