Russia, the West united on Iran 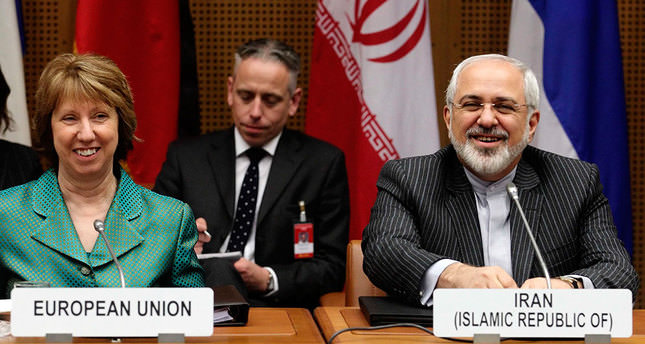 Russia and the West remain united in their quest to negotiate a final agreement with Iran to curb its nuclear activities and lift sanctions despite tensions over Ukraine, the spokesman of EU foreign policy chief Catherine Ashton said

VIENNA – Iran and six world powers met yesterday in Vienna for a new round of talks on scaling back Iran's nuclear program and on lifting all sanctions targeting the Islamic republic. "I haven't seen any negative effect at all of what's going on in other parts of the world. We will continue our good work in a unified fashion," Ashton's spokesman Michael Mann said. The remarks came at the start of a new round of talks in Vienna between Iran and six world powers after a landmark interim agreement late last year.

Ashton is the lead negotiator on behalf of Britain, China, France, the United States, Russia and China, which are aiming for a comprehensive agreement to allay western fears that the Islamic republic is seeking nuclear weapons.

Deputy Foreign Minister Sergei Ryabkov, who is representing Moscow at the talks, said US sanctions against Russia over its military intervention in Crimea reflected a "pathologic reluctance to acknowledge reality," Russian media quoted him as saying Monday.
At the same time, he said he hoped Washington's steps would not affect relations among the five permanent UN Security Council members and Germany during their talks with Iran.

Under a deal reached in November, Iran froze some sensitive enrichment activities in exchange for the European Union and the US suspending some economic sanctions.

The world powers now aim for a comprehensive agreement to further limit Iran's uranium enrichment and prevent the completion of a plutonium-producing reactor, which would make it difficult for Tehran to make nuclear arms.

Since the previous high-level talks in Vienna last month, government experts from the involved countries have been working on the technical details of the nuclear concessions and the lifting of sanctions. "The progress thus far has been encouraging," Mann said. The start of the meeting was overshadowed by Iranian Foreign Minister Mohammad Javad Zarif 's decision to cancel a dinner with EU foreign policy chief Catherine Ashton on Monday to protest her meeting with Iranian dissidents during her visit to Tehran.

Mann pointed out that Ashton always meets with civil society representatives during her travels and does not coordinate such encounters with foreign ministries. Ashton and Zarif had talked about this "misunderstanding"
Tuesday morning, Mann said.

Iran rejects Western allegations of nuclear weapons research and development projects and maintains that its nuclear program is geared toward energy and science.