Iran talks 'substantive,' next round April 7-9 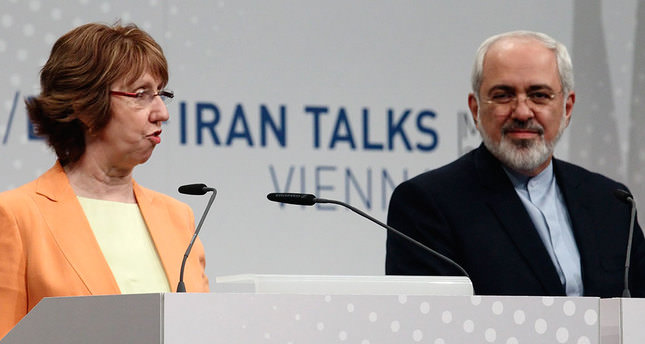 Speaking in a joint statement to media with Iran Foreign Minister Mohammad Javad Zarif, Ashton, the powers' chief negotiator, said the next round would also take place in the Austrian capital.

This week's gathering was the second in a series aiming to transform by July a November interim deal into a lasting accord that resolves for good the decade-old standoff and silences talk of war.

Iran insists its atomic program is peaceful but because of suspicions that it wants to build nuclear weapons it has been put under a string of U.N. and Western sanctions. Iran on Wednesday said more time was needed to hammer out a permanent nuclear agreement. "It is too early to enter into negotiations for drafting a text for a final agreement," senior Iranian negotiator Abbas Araqchi was quoted as saying by ISNA news agency.

Under November's interim agreement, Iran froze key parts of its nuclear program in return for minor sanctions relief and a promise of no new sanctions for six months.

Although it could be extended, the deal is currently due to expire on July 20.

The six powers, which include the United States, China, Russia, Britain, France and Germany, now want Iran to reduce permanently or at least for a long time, the scope of its nuclear activities in order to make it extremely difficult for Tehran to develop nuclear weapons.
This would likely include Iran slashing the number of centrifuges enriching uranium, which can be used for peaceful purposes but also in a bomb if highly purified, and allowing tougher U.N. inspections.

But even though in return Iran would see sanctions lifted, it remains far from certain whether ultra-conservative elements in Tehran around supreme leader Ayatollah Ali Khamenei would accept such limitations.

Any deal that leaves some of Iran's nuclear infrastructure intact would also be a hard sell to skeptical U.S. lawmakers and Israel, the Middle East's sole, if undeclared, nuclear power.

On Tuesday, U.S. House and Senate members sent wish lists to President Barack Obama specifying what they wanted to see in any final deal, namely that Iran never gain the ability to build a nuclear bomb.

Topping the list of "core principles" sought by 83 of the Senate's 100 members was their demand that Iran not have the "right" to enrich uranium, a position rejected by Iranian officials.

So far, despite disagreements over the Syria conflict and other issues, the six powers have shown a united front over Iran, but events in Ukraine in recent weeks have precipitated the worst crisis in East-West relations since the Cold War.

Iranian and Western officials said however that the crisis has had no effect on the Iran talks.

Even before the Ukraine crisis erupted, Russian President Vladimir Putin was reported to be discussing a major deal with Tehran whereby Moscow would get Iranian oil in exchange for money, goods and help in building new nuclear reactors.

This would undermine Washington's efforts to cut off Iran's main source of revenue, a strategy which the U.S. credits with forcing Tehran to the negotiating table.