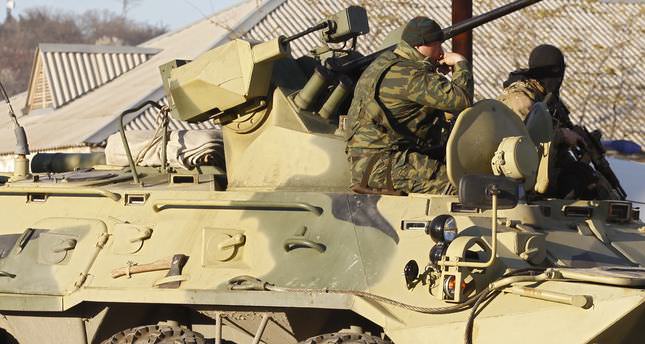 BELBEK, Ukraine – Russian troops have surrounded a Ukrainian airbase in Crimea. The deputy commander of the base in Belbek, near Sevastopol said on Saturday that Russian troops issued an ultimatum to forces inside to surrender.

Russian soldiers stormed through the walls of an air force base in Crimea after a Ukrainian commander ignored demands to leave, ordering his troops to 'stand their ground'.

An armoured vehicle rammed through the gate of the base, and an ambulance was also seen approaching with sirens blaring, as armed men went inside and pointed guns at Ukrainian soldiers.

The base, which belongs to Ukraine, is one of the few military facilities on Crimea still controlled by Ukraine after the annexation of the peninsula by Russian forces.The ultimatum was due to expire at 0730 am ET, but there was no sign of the Russians moving in on the base.

The Russian takeover of the Black Sea peninsula has been largely bloodless, though one Ukrainian serviceman was killed and two others wounded in a shooting in Simferopol earlier this week.

Ukraine's Defence Ministry said on Friday Crimea's bases were still formally under Ukrainian control, but most are now occupied by Russian troops.