Russia suspended from G8 over annexation of Crimea 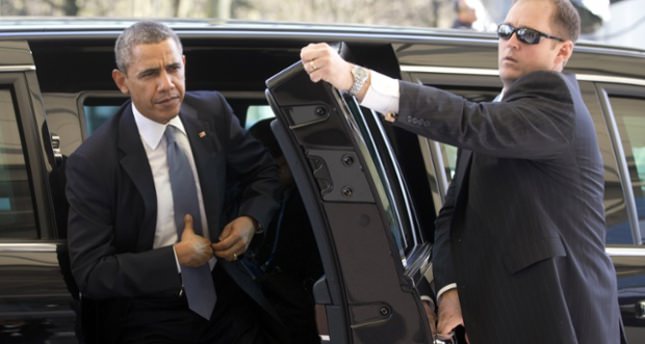 by Anadolu Agency Mar 24, 2014 12:00 am
THE HAGUE, Netherlands — Seeking to isolate Russia, the U.S. and Western allies declared Monday they are indefinitely cutting Moscow out of a major international coalition and warned they stand ready to order tougher economic penalties if Vladimir Putin presses further into Ukraine.

The moves came amid a flurry of diplomatic jockeying as the West grappled for ways to punish Russia for its annexation of the Crimean Peninsula and prevent the crisis from escalating.

President Barack Obama and the leaders of Britain, France, Germany, Italy, Canada and Japan met in the Netherlands for an emergency meeting of the Group of Seven. In a joint statement after their 90-minute meeting, the leaders said they were suspending their participation with Russia in the Group of Eight major industrial nations until Moscow "changes course."

The G-7 leaders instead plan to meet this summer in Brussels, symbolically gathering in the headquarters city of the European Union and NATO, two Western organizations seeking to bolster ties with Ukraine.

During their meeting in The Hague, G7 leaders stated "We will suspend our participation in the G-8 until Russia changes course and the environment comes back to where the G-8 is able to have a meaningful discussion and will meet again in G-7 format at the same time as planned, in June 2014, in Brussels, to discuss the broad agenda we have together. We have also advised our Foreign Ministers not to attend the April meeting in Moscow. In addition, we have decided that G-7 Energy Ministers will meet to discuss ways to strengthen our collective energy security."

"Today, we reaffirm that Russia's actions will have significant consequences," published by European Council the leaders' statement said. "This clear violation of international law is a serious challenge to the rule of law around the world and should be a concern for all nations."

"So be it," was the curt reaction of Russia's foreign minister, Sergei Lavrov, shortly before Russia's exclusion from the Group of 8 was announced. Lavrov has been in The Hague to attend a summit on nuclear security that has been running concurrently.

"If our Western partners believe the format has exhausted itself, we don't cling to this format. We don't believe it will be a big problem if it doesn't convene," Lavrov said.