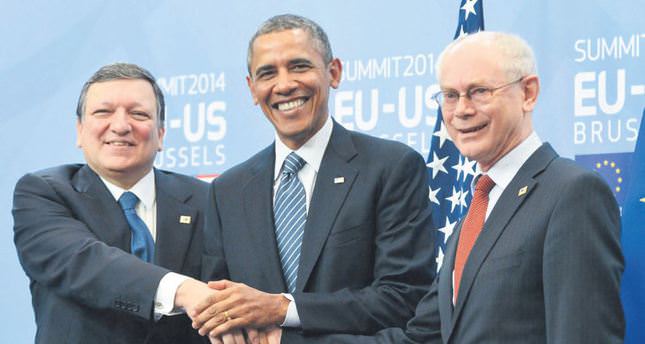 President Barack Obama and European Union leaders presented a unified front yesterday against Russia's annexation of Crimea, promoting trans- Atlantic trade as an antidote to Russia's influence in the region and a way to help Europe become less dependent on Moscow for energy

BRUSSELS — President Barack Obama spoke during a news conference yesterday at the Council of the European Union, after a working lunch with European Council President Herman Van Rompuy and European Commission President Jose Manuel Barroso that participants said was dominated by discussion of Ukraine. Van Rompuy called Russia's action in Crimea "a disgrace in the 21st century, and we will not recognize it."

Obama said if Russian leaders thought they could drive a wedge between Europe and the United States, "they clearly miscalculated." Obama said coordination between the U.S. and Europe on economic sanctions against Russia has been excellent and warned that if Russia continues on its current course, "the isolation will deepen."

The leaders also expressed confidence they would complete a Trans-Atlantic Trade and Investment Partnership that seeks to remove trade barriers between the 28-nation bloc and the U.S. Obama noted the deal arrangement would have a Ukraine connection because it could provide a counterweight to Russian energy leverage in Europe. Obama said some countries have legitimate questions about whether free trade deals will benefit them in the long-term. But he cautioned skeptics to wait to see what's negotiated before reaching conclusions.

The president said some suspicions about the so-called TTIP have been unjustified. He declared that he has fought for consumer and environmental protections during his political career and will not sign legislation that would weaken those protections. "I'm confident we can actually shape a trade deal" that is acceptable to critics on consumer protections and climate issues, he said. Obama's own relations with Europe have been hurt by revelations of communications prying by the U.S. National Security Agency. Van Rompuy said EU leaders conveyed their concerns directly to Obama in their meeting, and the president agreed to take aggressive steps to address the issue. Van Rompuy called for "equal treatment of EU and U.S. citizens."

Obama came to Brussels to shore up commitments he received from allies in The Hague, Netherlands, to reassure Eastern European members of NATO that the alliance will stand by them and to make a larger point about European security a quarter-century after the fall of the Iron Curtain. He planned to meet later with NATO Secretary-General Anders Fogh Rasmussen, head of the alliance born as a bulwark against the Soviet Union.

Obama said that he wants to see every NATO partner "chip in" for mutual defense and that the members should examine their defense plans to make sure they reflect current threats. "I have had some concerns about a diminished level of defense spending by some of our partners in NATO," Obama said. "The situation in Ukraine reminds us that our freedom isn't free." With tensions running high on the continent, Obama earlier called for a recommitment to peace during a solemn pilgrimage to a World War I site, Flanders Field American Cemetery and Memorial in northwest Belgium. "This visit, this hallowed ground, reminds us that we must never ever take our progress for granted," Obama said. "We must commit perennially to peace, which binds us across oceans."

Followed by the stirring sound of a bugler playing Taps, Obama joined Belgian Prime Minister Elio Di Rupo and King Phillipe in laying a trio of wreaths at the white stone monument at the center of the cemetery, the site of a significant World War I battle. The three leaders then walked among some of the white crosses that mark the burial site of 368 American troops, most of whom gave their lives in liberating Belgium from German occupation. The Belgian leaders did not mention Russian President Vladimir Putin by name in remarks afterward, but clearly were referencing his audacious annexation of Crimea as they recalled the lessons of world war. "Our countries have learned the hard way that national sovereignty quickly reaches its limits" when confronted with armed adversaries, who don't respect that sovereignty, said King Phillipe.

"We have to continue to draw lessons from the terrible war that started 100 years ago," Di Rupo said. "And, above all, we have to prevent new conflicts. Those who ignore the past are taking the risk to relive it." The president, stepping up the task of solidifying broad-based support against Russia, dismissed Russia a day earlier as a mere "regional power" that was threatening its neighbors "not out of strength, but out of weakness." He said that as president, he worried more about a nuclear device in Manhattan than he did about Russia. It was the kind of brush-off-your-shoulder language sure to antagonize the nationalistic Putin, but it also belied the time and energy Obama and European leaders have devoted to isolate Russia and fashion a menu of sanctions designed to stop Moscow's aggression.

Obama planned to conclude his day with his only speech of the weeklong, four-country trip, tying the current Ukraine crisis to his vision of the United States and Europe as anchors of democracy and international law. Obama also used the cemetery visit to criticize Syria's chemical weapons use, noting that gases were also used during battles in the wider area. "The lessons of that war speak to us still," Obama said. The president quoted the closing line from "In Flanders Fields," a poem by Canadian soldier John McRae. "To you from failing hands we throw the torch, be yours to hold it high. If ye break faith with us who die, we shall not sleep, though poppies grow in Flanders Fields," Obama read. Obama responded, "To all who sleep here, we can say we caught the torch, we kept the faith."