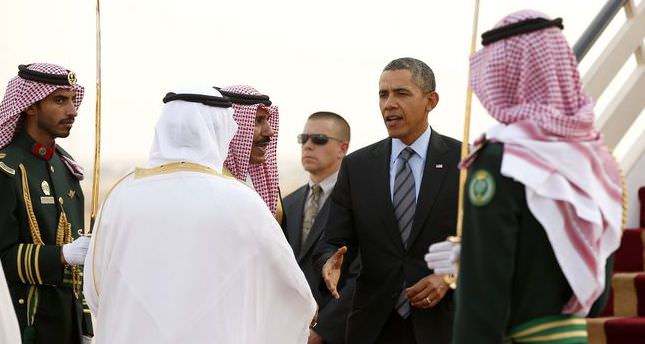 by French Press Agency - AFP Mar 28, 2014 12:00 am
RIYADH — U.S. President Barack Obama paid a visit on Friday to Riyadh for talks with Saudi King Abdullah as mistrust fuelled by differences over Iran and Syria has overshadowed a decades-long alliance between their countries. Obama arrived in the Saudi capital from Italy.

Saudi Arabia has strong reservations about efforts by Washington and other major world powers to negotiate a deal with Iran on its nuclear program.

It is also disappointed over Obama's 11th-hour decision last year not to take military action against the Syrian regime over chemical weapons attacks.

Saudi Arabia, the largest power in the six-nation Gulf Cooperation Council, fears that a possible U.S. withdrawal from the Middle East and a diplomatic overture towards Iran would further feed Tehran's regional ambitions.

The Iranian-Saudi rivalry has also crystallized in the context of the Syrian conflict where Tehran backs Syrian President Bashar Assad's regime, while several GCC states support the rebellion.