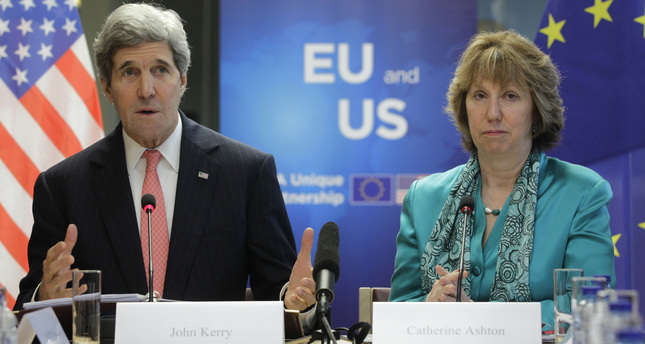 Natural Gas from the U.S. and a proposed pipeline through Turkey are among the options put on the table to reduce Ukraine's dependency on Russian gas supplies

BRUSSELS — Russia's decision to increase gas prices for Ukraine in the aftermath of the annexation of the country's Crimean Peninsula, has raised concerns about energy supplies in Eastern Europe. Russia has also been increasing its military presence near the Ukrainian border in recent weeks.

Officials from the European Union and United States voiced plans yesterday to decrease Ukraine and Europe's dependence on Russia for gas and said they would cooperate to diversify energy supplies in Europe. A pipeline for supplying Azerbaijani gas from the Caspian Sea to Europe via Turkey was among the issues discussed at a meeting of EU and U.S. officials in Brussels.

U.S. Secretary of State John Kerry, EU High Representative for Foreign Affairs and Security Policy Catherine Ashton, EU Commissioner for Energy Gunther Oettinger and U.S. Deputy Secretary of Energy Daniel Poneman attended a high-level energy summit in Brussels yesterday. "No nation should use energy to stymie a people's aspirations. It should not be used as a weapon," U.S. Secretary of State John Kerry said as he opened a meeting of the U.S.-EU Energy Council.

Speaking one day after Moscow heaped even more pressure on Ukraine's teetering economy with the painful hike, Kerry added, "We can't allow for it to be used as a political weapon or as an instrument for aggression."

The U.S. and its European allies were working "in lockstep" to bring gas to Ukraine from neighboring Poland and Hungary as well as to develop a route from Slovakia, said the diplomat, who cochaired the meeting with EU foreign policy chief Catherine Ashton.

Ukraine, which is heavily dependent on gas supplies from its former Soviet master, has also agreed as part of an IMF bailout package to rein in its energy subsidies.

This would "make their energy market more competitive. This is critical, obviously," Kerry said. In a joint statement issued after the meeting, the council said the "developments in Ukraine have brought energy security concerns to the fore and prove the need to reinforce energy security in Europe." It also delivered a warning to Moscow that "energy relations with Russia must be based on reciprocity, transparency and fairness" in order "to ensure a level playing field for the safe and secure supply of energy." The meeting came one day after Russia said Ukraine will now pay $385.5 per 1,000 cubic meters of gas from the previous cut rate of $268.5.

The council vowed to work with Ukraine as it seeks to diversify its gas supplies and transform its system of subsidies "into targeted measures that mitigate the impact of price increases on the poor and vulnerable." Kerry also highlighted that the U.S. and Europe had work to diversify their own supplies, as the United States develops plans to become energy self-sufficient through such technologies as fracking. "Our new capacities as a gas producer and the approval of seven export licenses is going to help supply gas to global markets, and we look forward to doing that starting in 2015," Kerry said. "We will supply more gas than all of Europe consumes today."

The council meeting also discussed plans for a southern gas corridor which aims to bring gas from the Caspian via a pipeline from Azerbaijan to Turkey and then on to Europe. Russia is Europe's biggest gas supplier, providing about a quarter of the demand and about a third of Russian gas to Europe is exported through Ukraine. High tensions between Ukraine and Russia after secession of Crimea, triggered concerns over energy supplies, though the continent remains less reliant on the Ukraine route. Besides, alternative routes such as Nord Stream, which goes through the Baltic Sea to Germany or another pipeline traversing Belarus and Poland before heading to Germany, have enough spare capacity for the continent's gas needs. Still, Europe may need more alternatives in the future as relations with Russia remains shaken over Ukraine crisis.

Turkey is at the heart of the EU's ambitious plan to bring Azerbaijani gas from the Caspian Sea to reduce the continent's dependence on Russia.

In December 2013, agreements were signed to begin the construction of pipelines. Through TANAP and TAP, two large pipelines, gas will be pumped to Italy, passing through Greece and Italy from Turkey.