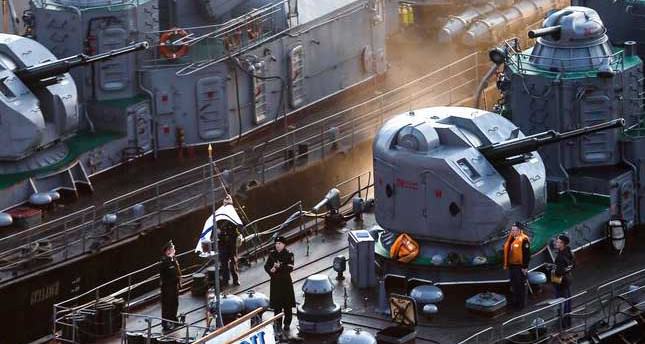 by Apr 07, 2014 12:00 am
KIEV — A Russian soldier has shot dead a Ukrainian naval officer in eastern Crimea, Ukraine's defense ministry said on Monday.

The ministry gave few details of the death late yesterday in the town of Novofyodorovka. Russian forces took over Crimea in an almost bloodless operation before Moscow annexed the region last month.

Meanwhile pro-Russian protesters who broke into state security headquarters in the eastern Ukrainian city of Luhansk have seized weapons, and highway police have closed down entrances into the city, local police said today.

Pro-Russian protesters in the east seized official buildings in three cities on Sunday, including the regional administrative building in the mining hub of Donetsk.

Mainly Russian-speaking eastern Ukraine has seen a sharp rise in tension since Moscow-backed Ukrainian president Viktor Yanukovich's overthrow in February and the advent of an interim government in Kiev that wants closer ties with Europe.

Demonstrators in Donetsk and Luhansk demanded a referendum be carried out on whether to join Russia like that held in Crimea that paved the way for its annexation by Russia.