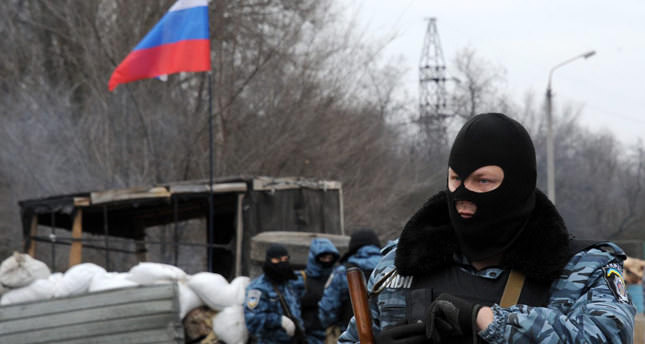 by AA Apr 07, 2014 12:00 am
KIEV — Pro-Russian separatists who seized a provincial administration building in the eastern Ukrainian city of Donetsk on Monday proclaimed the region an independent republic in a move echoing the run-up to Russia's annexation of Crimea.

The Interfax news agency said the activists demanded that a referendum be held no later than May 11 on the breaking away of the Donetsk region, which borders Russia.


In footage uploaded to the Internet, an unidentified pro-Russia activist in the provincial government headquarters in Donetsk asked Russian President Vladimir Putin to send peacekeeping troops to the region.

Earlier Monday, Ukraine's prime minister accused Russia of sowing unrest in his country's eastern provinces as a pretext for dispatching troops across the border. Speaking at an emergency cabinet meeting, Prime Minister Arseniy Yatsenyuk said Russia was behind seizures of several government buildings in eastern regions that have for weeks seen a spike in secessionist sentiment.

Russian troops stationed nearby the frontier

Earlier in the day, the Interior Ministry reported that armed gunmen had occupied a security services building in Luhansk, a city some 25 kilometres west of Russia that has seen frequent protests since the country's Russia-friendly president was ousted in February.

Police in Luhansk said they have been put on alert and have blocked all entrance.
Eastern Ukraine was the heartland of support for Yanukovych, the president who fled to Russia in February after months of protests. About half of the region's residents are ethnic Russians, many of whom believe Ukraine's acting authorities are Ukrainian nationalists who will oppress Russians.
Last Update: Apr 08, 2014 11:53 am
RELATED TOPICS