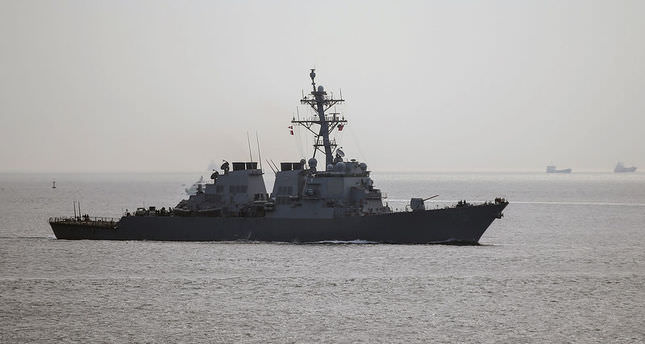 by Daily Sabah Apr 12, 2014 12:00 am
ISTANBUL — Russia's claims that U.S. warships that passed through the Turkish straits have violated the 21-day limit set by the Montreux Convention by 10 days was denied by Turkey. Turkey rejects the accusation that ships passed the limits described in the convention. After the annexation of Crimea to Russia, tensions in the eastern regions of Ukraine resulted in increased tensions in the straits as well as supporters of both sides sending warships to strengthen their positions. Two Russian Navy ships passed through the Dardanelles down to the Aegean Sea, while a U.S.

Navy ship was directed from Spain to the Black Sea. After Russia annexed Crimea, the eastern cities of Donetsk, Kharkov and Luhansk in Ukraine saw pro-Moscow protestors occupy local government buildings and demonstrate against the pro-EU Kiev government.

Coming from the direction of the Marmara Sea, the two Russian ships that crossed the Dardanellesnamed Saratov and Yamal, passed through the Dardanelles. The U.S., which kept its USS Truxton destroyer in the Black Sea until March 21 in the first days of the Ukrainian crisis, also moved to buffer its position. According to the U.S. Department of Defense, a U.S. naval ship passed through the straits and arrived in the Black Sea on Thursday.

The USS Donald Cook, the fourth naval ship sent to the region after the annexation of Crimea by Russia, is equipped with Aegis missile defense systems and Tomahawk missiles.

The U.S. said on the website of the 6th Fleet the ship would arrive in the Black Sea on Thursday to support peace and stability in the region.

According to the U.S., the USS Donald Cook went to the Black Sea to enhance joint efforts conducted with members of NATO within the framework of the Montreux Convention.

Russian Minister of Foreign Affairs Sergey Lavrov accused Turkey of allowing the U.S. naval ships to stay in the Black Sea more than three weeks in defiance of the Montreux Convention and letting ships with tonnages heavier than what is described by the convention transit.

These accusations increased tensions between Ankara and Moscow.

Turkish authorities said U.S. ships that passed through the straits to the Black Sea did not stay more than three weeks and their tonnages were in compliance with the convention. "Turkey has exercised the requirements of the Montreux Convention scrupulously for 78 years," said the Turkish Ministry of Foreign Affairs in a statement. "Within the context of exercising the Montreux Convention, the allegations in the media attributed to the Ministry of Foreign Affairs of the Russian Federation do not reflect the truth in any way. Conveyed to our ministry by the Russian Embassy in Ankara, the allegations are duly replied."

The Montreux Convention regulates the transit of ships in Turkish straits (Dardanelles and Bosporus) and the security of the straits region.
It replaced the Straits Convention, which was signed together with the Treaty of Lausanne in 1923.