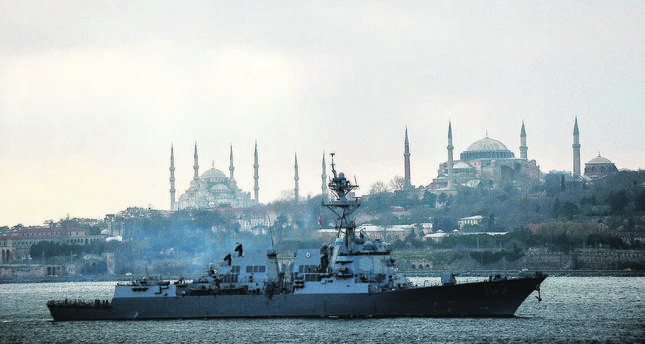 ISTANBUL — Following his negotiations in Hiroshima, Japan, Davutoğlu on Saturday gave an official statement on a variety of issues including energy transfers between Russia and Western countries and the Montreux Convention, in particular. Responding to questions about Russia's allegation that Turkey violated the Montreux Convention by permitting U.S. warships to stay in the Black Sea, Davutoğlu expressed that the Montreux Convention is one of the most decisively-exercised agreements in place since the 20th century. Russia claimed earlier this month that two U.S. vessels exceeded the waiting period in the Black Sea region, 21 days, as specified in the convention.

Russia claimed earlier this month that two U.S. vessels exceeded the waiting period in the Black Sea region - 21 days, as specified in the convention. "We will not allow the violation of the Montreux Convention," he said, underlining its significance. "The Montreux Convention is important to maintain sustainability around the Black Sea and vital for the security of Istanbul and the Bosporus,"
Davutoğlu stated.

Referring to events such as World War I and II, the Cold War and the Balkan crises, Davutoğlu added, "Turkey never hesitates to take the necessary steps regarding the Montreux Convention and strictly abides by its conditions." He went on to note that Turkey has already given a response to Russia's statements.

Emphasizing that there is no room to worry about this issue, Davutoğlu continued, "It is not rational to mention a tension or crisis between Turkey and Russia.

Turkey is determined to implement the Montreux Convention. As the strategic partner of Ukraine and Russia, Turkey will sustain relations with these countries on a steady base. We always place importance on Crimea's sustainability and our kinsmen in Crimea."

Davutoğlu drew attention to the mutual trust between partners, adding that Turkish diplomat Ertuğrul Apakan was appointed as the monitoring head of the Organization for Security and Co-operation in Europe (OSCE). He interpreted Apakan's appointment as Turkey's reputation being progressively recognized by all parties, saying, "This appointment reflects the trust toward Turkey."

Regarding allegations of Russia's intimidation of Turkey, Davutoğlu expressed that these are only comments circulated by the press. He described the news as "the policy of some circles trying to create an implication as if Turkey was always in a crisis with neighboring countries. "It is possible to encounter some disagreements if you are going through such critical periods," said the minister, adding, "We have always accomplished to resolve disagreements with Russia. If there are any different opinions, we are ready to come to the table. We want to assure you that Turkey will never allow any permanent tension. As usual, we will abide by the rules of the Montreux Convention word for word."

With regard to Russia's claims of energy transfer following the Ukrainian crisis, Davutoğlu remarked that Turkey is determined to diversify energy sources regardless of any crisis. "Whether there are any crises or not, Turkey is required to fill the energy deficit to sustain development," he said. "Apart from Nabucco, the TANAP [Trans Anatolia Natural Gas Pipeline] and the TAP [The Trans Adriatic Pipeline] projects have been developed to fill the energy gap. Along with the Caucasus energy projects with Azerbaijan, I believe everyone has realized the significance of energy negotiations with Northern Iraq thanks to our sustainable policies. I also hope that the circles criticizing us will once more understand the progress of the Turkish government on diversifying energy sources."

Highlighting that the cooperation between Turkey and Russia is not only focused on natural oil, but also nuclear fields, Davutoğlu said, "We are exerting great effort not to let our energy cooperation be adversely influenced by the recent issues. We do not expect any negative development in the near future."

The Montreux Convention regulates the transit of ships in Turkish straits (Dardanelles and Bosporus) and the security of the straits region. It replaced the Straits Convention, which was signed together with the Treaty of Lausanne in 1923. Turkey, the former USSR, England, France, Bulgaria, Romania, Greece, Yugoslavia and Japan signed the Montreux Convention in 1936 in Switzerland.