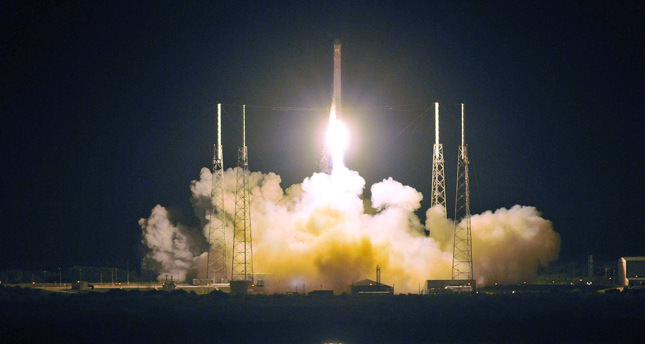 by reuters
Apr 21, 2014 12:00 am
CALIFORNIA — A cargo ship owned by Space Exploration Technologies arrived at the International Space Station on Sunday, with a delivery of supplies and science experiments for the crew and a pair of legs for the experimental humanoid robot aboard that one day may be used in a spacewalk.

About three hours later, the crew bolted the capsule to a docking port on the station's Harmony module. They plan to start unpacking on Monday.

"The Easter Dragon is knocking at the door," astronaut Randy Bresnik radioed to the crew from Mission Control in Houston.

Space Exploration, known as SpaceX, had planned to launch its Dragon cargo ship in March, but was delayed by technical problems, including a two-week hold to replace a damaged U.S. Air Force radar tracking system.

The launch also provided privately owned SpaceX an opportunity to carry out another test in its quest to develop a reusable rocket.

After the Falcon 9's first-stage section separated from the upper-stage motor and Dragon capsule, the discarded rocket relit some of its engines to slow its fall back through the atmosphere and position itself to touch down vertically on the ocean before gravity turned it horizontal. The booster also was equipped with four 25-foot-long landings for stabilization.

Data transmitted from an airplane tracking the booster's descent indicated it splashed down intact in the Atlantic Ocean - a first for the company.

SpaceX hopes to return a Falcon 9 booster to land before the end of the year. Eventually, it would like to recover and reuse its rockets to cost launch costs.

"There are just only a few more steps that need to be there to have it all work," Musk told reporters after Friday's launch. "I think we've got a decent chance of bringing a stage back this year, which would be wonderful."

SpaceX is one of two companies hired by NASA to fly cargo to the space station after the space shuttles were retired in 2011. The company is competing to develop a space taxi for astronauts as well.

So far, SpaceX has made one test flight and three cargo runs to the station under a $1.6 billion contract with NASA.

Among the cargo that arrived aboard Dragon on Sunday are a pair of zero-gravity legs for the station's prototype robot, Robonaut, which currently consists of a humanoid head and torso.

"The legs are not really for walking. They're used for climbing around," Andy Petro, with NASA's Space Technology Mission Directorate in Washington, D.C., told reporters during a prelaunch press conference.

Each leg has seven joints and clamping devices where the feet would be attached to rails and sockets both inside and outside the station, though it will be some time before software is developed to allow Robonaut to participate in a spacewalk, program manager Mike Suffredini said.

Dragon will be reloaded with science samples and equipment no longer needed on the station and returned to Earth in about a month.