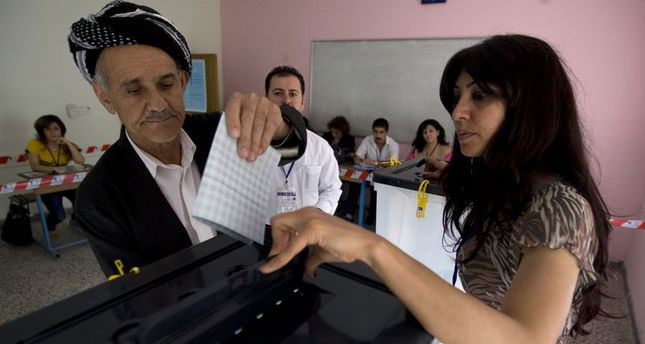 The poll in Iraq could mean that changes are in store for neighboring Turkey's relations with Baghdad. Siding with Kurds in northern Iraq who are at odds with Baghdad over oil revenues, Turkey risks straining relations with the Shiite-led government of Nouri al-Maliki, whose governing coalition is expected to claim victory again

IRAQ — In yesterday's edition, it was discussed how the upcoming Iraqi parliamentary elections scheduled for April 30 would be an exercise in brute force between the incumbent Iraqi Prime Minister Nouri al-Maliki on the one hand, and a collection of his rivals who are not necessarily allied with one another, and could in fact also be enemies on the other. This can be likened to a tug-of-war, only with Maliki and his allies having significantly more rope than his rivals. However, Maliki is not the only player in this game for power and resources.

Other, international, powers have designs, ambitions and alliances that are larger than Iraq's political players, such as Iran who supports Maliki, but also supports his other adversaries from the Shiite political community like the radical Shiite cleric Muqtada al-Sadr and Ammar al-Hakim, the current head of the the Islamic Supreme Council of Iraq (ISCI). However, another regional power that has been emerging in the past decade is Turkey under the leadership of Prime Minister Recep Tayyip Erdoğan.

Turkey has established itself as an influential regional player by curbing the power of the Turkish deep state that was infamous for its numerous military interventions in civilian politics, and by creating an energetic economy that is still rapidly growing. Turkey has looked beyond its own borders as it has realized that in order to continue to become more prosperous it must engage successfully with its neighbors.

In the Iraqi context, the Erdoğan government has effectively co-opted the aid of the Kurdish Regional Government (KRG) in northern Iraq in order to assist in their mission of achieving a lasting reconciliation with Turkish Kurds and ridding the country of PKK terrorism.

Also, Turkey, as a rapidly developing country, is ever hungry for more and more energy. This thirst for energy can conceivably be quenched with plentiful Iraqi oil, or at the very least it can diversify its energy supplies which will prevent Turkey from being reliant on ever ambitious neighbors such as Iran for their energy needs. Massoud Barzani, the president of the KRG, is keen to engage with Turkey not only to secure a significant part of the border that he sees as perhaps delineating a future Iraqi Kurdish state, but also to increase his own power by being an oil provider in Turkey and using Turkish ports to sell oil further afield.

These mutually beneficial goals have enabled these perhaps unlikely allies to work together and become more closely intertwined.

Therefore, it should be no surprise that when Maliki acts belligerently toward the Kurds, as he is doing even in the run up to the elections, Turkey will more than likely side with them rather than with the central Iraqi government in Baghdad. This is because the central Iraqi government is perceived as being weak, transient, easily influenced by external powers and also because the KRG is willing to offer lucrative oil and other economic deals to the Turkish government that the Baghdad administration cannot, or will not, compete with. It is illogical to assume that Turkey will risk its interests on the basis of Maliki's insistence that Turkey not involve itself in its affairs.

Moreover, Maliki is working with Iran to send scores of sectarian Shiite militias into Syria to fight alongside forces loyal to the brutal dictator Bashar Assad. Here, Turkish and Iraqi policy clash and so it is in Turkey's interest to replace Maliki with a government less likely to facilitate the flow of fighters and weapons into the hands of Assad and terrorists. Failing this, Turkey will engage with groups that oppose Maliki in order to weaken his domestic clout and to prevent him from meddling in their broader interests, such as the Syrian revolution and also the oil flowing from the KRG.

If Maliki wins the elections through crook rather than by hook, we can expect Turkey to continue to oppose him unless he changes his attitude toward Ankara.

That being said, Turkey's interests in Iraq are not solely limited to oil, Syria and the Kurdish issue. The Iraqi Turkmen, an ethnic Turkic people living in Iraq, have historical ties to Turkey since the days of the Ottoman Empire. A challenge facing the Erdoğan administration is to win over the Turkmen who perhaps feel let down by Ankara who have worked with the Kurds who are claiming that Kirkuk belongs to them. As such, the Turkmen feel that their home is being threatened and that by supporting the Kurds in other matters, the Turkish government is ignoring them and unwilling to support them. Thus, the ruling AK Party are losing ground to the Turkish Nationalist Movement Party (MHP) within the Iraqi Turkmen population, and this could potentially deprive the Turkish government of a useful ally on the ground in Iraq which constitutes almost 10 percent of the total Iraqi population. This percentage is not insignificant, and as the third-largest ethnic group in Iraq, Turkmen could potentially create leverage for Turkey in order to better influence events in Iraq. Therefore, if the Iraqi elections go poorly and Maliki increases his belligerence toward the Kurds to the point that they decide to pursue full independence, Turkey will have to make a choice about whether to allow them to form a new state of Kurdistan or intervene to prevent the Kurds from occupying Kirkuk and displacing the Turkmens.

This clash of interests could potentially destabilize Turkey's domestic gains with the Kurds, and it could also act as a rallying call for PKK terrorists to once more launch attacks against Turkish civilians if Turkey moves to protect Iraqi Turkmen from Kurdish separatists. As such, a lot hinges on the Iraqi elections, and the results will dictate to what extent Turkey will involve itself in the Iraqi political arena.

As we have already shown, Maliki is likely to narrowly win the elections and so Turkey would be wise to expand their options and begin to support moderate Sunni Arabs politically, and they could perhaps encourage them to work alongside the Turkmens in order to form a broad coalition friendly to Turkey that would also potentially form a formidable political force which could challenge sectarian politicians like Maliki in the future.