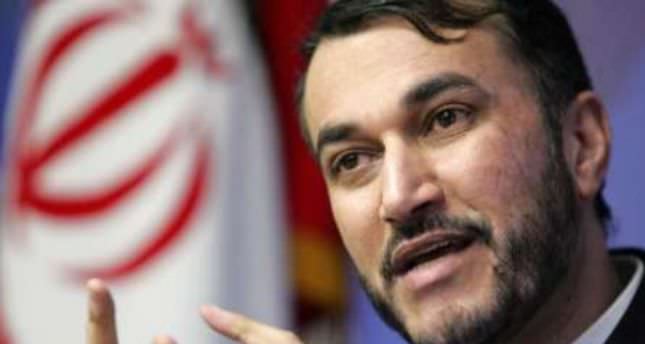 by AA Jun 09, 2014 12:00 am
CAIRO — Iranian Deputy Foreign Minister for Arab and African Affairs Hossein Amir-Abdollahian asserted on Monday that his country is ready to attend a summit with Egypt, Turkey and Saudi Arabia.

"We have signaled during our talks with Egyptian officials that Iran is ready to attend a high-level discussion with Turkey, Egypt and Saudi Arabia, in addition to other countries," he told a press conference in Cairo.

When asked by AA about possible Iranian mediation between Cairo and Ankara, the senior diplomat described cooperation between Egypt and Turkey as "essential" to solving the Middle East's problems.

Amir-Abdollahian said Egypt and Turkey "both play roles fighting terrorism in the region," going on to urge both countries to cooperate to serve the interests of the Islamic world.

Amir-Abdollahian said his country was ready to assist Egypt in all fields.

"Iran is ready to help Egypt in the field of economic development and in other domains," he said.

The diplomat asserted that Iranian representation at Sunday's inauguration of Egyptian President Abdel-Fattah al-Sisi "sends a positive message to the Egyptian people."

He thanked Egypt for "understanding" Tehran's right to use peaceful nuclear energy, saying Iran was ready to help all friendly nations in the field of nuclear technology.

Amir-Abdollahian also said that he had discussed the Syria file with Egyptian officials.

"Tehran and Cairo share identical views about the Syrian issue," he added.

"We believe resistance is the only solution to restoring the Palestinian people's legitimate rights," he said.

Amir-Abdollahian went on to describe Iran's relations with Saudi Arabia as "normal."

"There is no major problem between the two countries. There are only some misunderstandings about certain regional issues," he said.