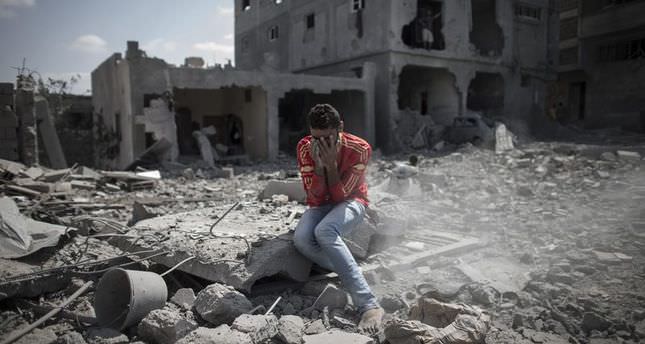 by Anadolu Agency Jul 26, 2014 12:00 am
Israel extended a humanitarian cease-fire by four hours to midnight Saturday as the Palestinian death toll in the conflict rose to more than 1,000.
Yuval Steinitz, an Israeli Cabinet minister, told Israeli TV station Channel 10 that a further extension would be considered at a Cabinet meeting Saturday night.
Still, the cease-fire remains fragile. The Israeli military said in a statement that it "shall respond if terrorists choose to exploit" the lull to attack Israeli troops "or fire at Israeli civilians." It also said that operations to locate and neutralize tunnels would continue.
The developments come as Israeli Defense Minister Moshe Yaalon told troops Friday that Israel may significantly widen the Gaza ground operation after Israel rejected a U.S.-backed proposal for a week-long truce because it would require its forces to interrupt its operation to destroy Hamas tunnels.
Meanwhile, ceasefire in Gaza revealed full extent of Israeli destruction.Palestinians walked through the concrete rubble that once used to be homes, collecting what keepsakes they could recover. Some openly wept when they saw what little remained. Two men poured water for birds left behind in one demolished home.
Some Palestinian men climbed over an Israeli armored vehicle, apparently left behind during a military operation. Others held funerals for their dead.
At least 1000 Palestinians, mainly civilians, have been killed and more than 6,000 wounded over the past 19 days, according to Palestinian officials. Israeli strikes have destroyed hundreds of homes, including close to 500 in targeted hits, and forced tens of thousands of people to flee, according to Palestinian rights groups.
Last Update: Jul 26, 2014 11:03 pm
RELATED TOPICS