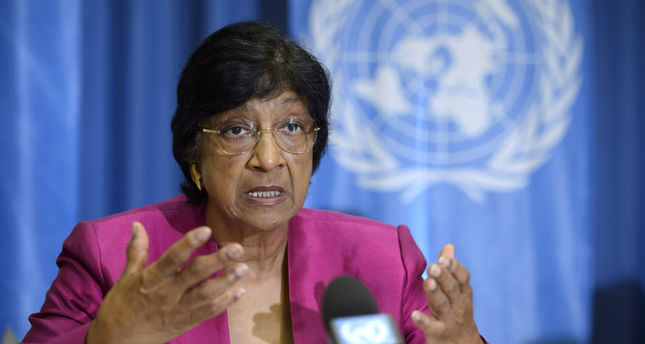 by AA Aug 01, 2014 12:00 am
The UN human rights chief Navi Pillay slammed Israel on Thursday for acting in a way that "appears to be a deliberate defiance of obligations that international laws impose."

Pillay said one day after an Israeli attack against a UN school in Gaza, in which 15 civilians were killed: "We cannot allow impunity. We cannot allow this lack of accountability to go on."

She said that the rules of international law were voted by all member states of the United Nations including Israel, "and there should be no exceptions for the law that provides specific protections for civilian objects or personnel.

"The system in each country is based on principles: you investigate, prosecute and punish... That has not happened here," Pillay said.

Israel and Hamas must distinguish between combatants and civilians, and protect civilians from direct or indiscriminate attacks, the UN under-secretary-general for humanitarian affairs said Thursday.

"We have all watched in horror the desperation of children, of civilians as they have come under attack," Valerie Amos told the Security Council via video-link from Trinidad and Tobago.

"The parties to the conflict have an obligation -- an absolute obligation -- to protect civilians from direct or indiscriminate attacks," Amos said. "There can be no justification for failing to do so."

As many as 1,434 Palestinians -- mostly civilians -- have been killed and around 8,000 injured in unrelenting Israeli attacks since July 7, according to Palestinian health officials.

According to official Israeli figures, 56 Israeli soldiers and three civilians have been killed since the hostilities began.

"Each party must be held accountable to international standards; not the standards of the other party," Amos stressed.

Briefing the UN Security Council via video-link from Gaza City, Pierre Krahenbuhl, the chief of UN agency for Palestinian refugees, said there was a human story behind every suffering of the civilians in Gaza.

He described the conditions in the UN shelters in Gaza as "increasingly dire."

"There is no water for personal hygiene, very few showers and latrines are totally inadequate," Krahenbuhl said.

"There are thousands of pregnant women in our schools, deliveries are precarious and we are sheltering newborns in these appalling conditions," he explained. "Our ability to mitigate this situation is of course heavily restricted by ongoing hostilities."

Israel's military offensive, dubbed operation "Protective Edge," is the Jewish state's third major offensive against the densely-populated Gaza Strip -- which is home to some 1.8 million Palestinians -- within the last six years.

Following his briefing to the Security Council, Krahenbuhl told the Anadolu Agency that serious violations of international law occurred during the Gaza conflict.

He said the UN had clear evidence that the Jabalia elementary girls school had been shelled, and called for a "transparent investigation" into the matter.

It is very important for that investigation to be given first to the country of concern, he said.

The Palestinian Health Ministry announced that the total Palestinian death toll reached 1,363 on Thursday. Pillay told reporters in Geneva that more than 850 civilians, including 249 children and 135 women, were among those killed since the Israeli operation against Gaza began on July 7.

Meanwhile, according to official Israeli figures, 56 Israeli soldiers and three civilians have been killed since the military offensive, dubbed operation "Protective Edge," began.