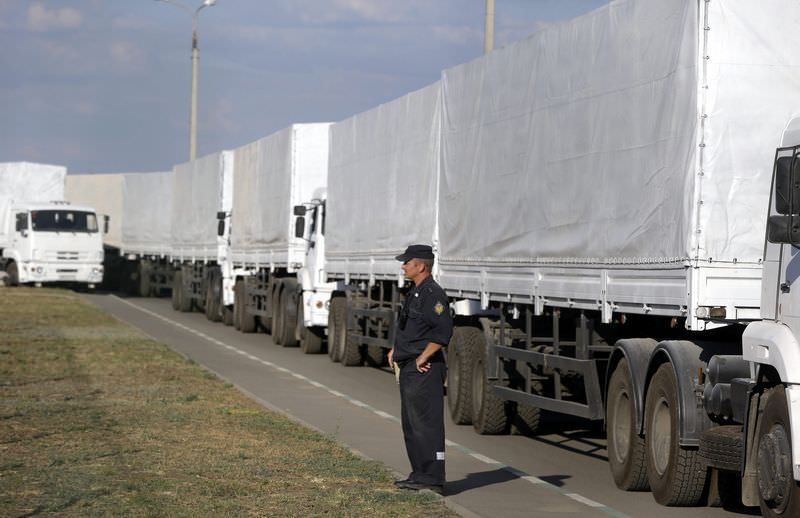 by Aug 22, 2014 12:00 am
Russia ordered a convoy of aid trucks across the border into eastern Ukraine on Friday apparently without Kiev's permission, raising the danger of direct confrontation with the Ukrainian military which is fighting pro-Russian rebels.

A Reuters witness said about 70 white-painted trucks, part of a column of about 260 that had been waiting at the border for over a week, had crossed the border and was heading towards the rebel stronghold of Luhansk accompanied by a small number of separatist fighters.

An unnamed Ukrainian official told Interfax news agency it was not escorted by the International Committee for the Red Cross (ICRC), one of the terms previously agreed by Kiev and Moscow.

Kiev and Western capitals have expressed concern that the convoy, held up by wrangling over the terms of passage, the content of the cargo and the role of the ICRC, could be used as a pretext for some form of direct Russian military intervention.

Russia denies the accusation as absurd.

Moscow had earlier declared it patience with the delays at the border to be an end.

"All excuses to delay sending aid have been exhausted," the Russian foreign ministry said in a statement, warning against any attempts to disrupt the convoy's movement. "The Russian side has taken the decision to act."

A Kremlin spokesman said President Vladimir Putin, accused in Kiev and the West of fomenting the four-month-old rebellion, had been informed that the aid convoy had started to advance towards Luhansk where separatists demand union with Russia.

The Foreign Ministry and Border Guard in the former Soviet republic of Ukraine had no immediate comment on the announcement from Moscow.

Russia denies sending arms and advisers to help rebels in Russian-speaking eastern Ukraine, who have suffered a string of defeats in recent weeks. Resistance now centers around the industrial city of Donetsk and Luhansk, with casualties mounting steeply on both sides.

After four months of fighting in the industrial, Russian-speaking eastern Ukraine that has claimed more than 2,000 lives on both sides, the area faces a humanitarian crisis, lacking supplies of food, medicine and clean water.