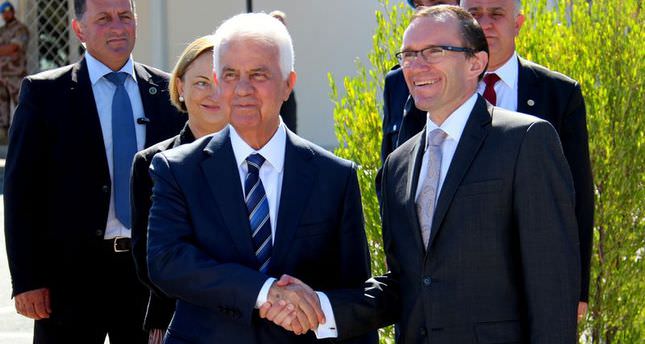 by Daily Sabah with AA Sep 18, 2014 12:00 am
The Turkish and Greek Cypriot sides of the divided island of Cyprus have agreed to further talks towards a permanent peace on the divided island, the President of the Turkish Republic of Northern Cyprus said.

Derviş Eroğlu told reporters on Wednesday that he had agreed with Greek Cypriot leader Nicos Anastasiades to move on to the "give and take" phase of negotiations.

His remarks followed UN-hosted talks in Nicosia which marked the end of preparatory discussions.

"Accordingly, we agreed to move the process forward to constructive and result-orientated talks," Eroğlu said.

He emphasized that a settlement for Cyprus is only possible via mutual compromise and said the two sides could find common ground in the end.

"What is important is to reach an agreement where we can see Turkish Cypriots living on this soil in peace and tranquility," Eroğlu added.

UN Special Adviser on Cyprus Espen Barth Eide said both sides had pledged to continue peace talks. "The leaders agreed to work towards coming to an agreement soon and then holding simultaneous referendums on both sides of the island," he said.

Stalled talks were resuscitated in February with a joint declaration outlining the details of a federal state re-uniting the island.

The solution is expected to address issues such as a constitutional framework; territorial adjustments; the return of property or compensation payments; and the return of displaced people.

Cyprus has been divided into a Turkish north and an internationally recognized Greek south since 1974. Talks between the Turkish and Greek Cypriot leaders and efforts to reunite the island have so far failed.

Turkish PM Ahmet Davutoğlu had called on the PM of Greece, Antonis Samaras, and Greek Cypriot leader Nicos Anastasiades to work together to set a peacemaking example in Cyprus, at a press conference held in the Turkish Republic of Northern Cyprus on Tuesday.