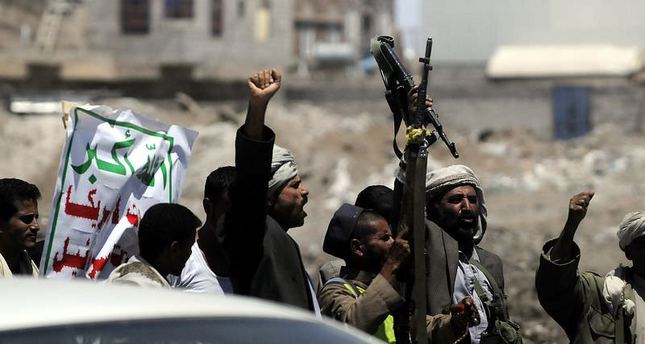 by Anadolu Agency Sep 21, 2014 12:00 am
Yemen's Shiite rebels seized the government headquarters in the capital on Sunday as Prime Minister Mohamed Basindawa resigned, accusing the president of being "autocratic", senior officials said.

The rebels, who have been locked in deadly clashes for days with Sunni fighters and troops, also took over the state radio station, officials said.

Basindawa said he had decided to step down to help an agreement between the president and Shiite Houthi group.

He accused Yemeni President Abd Rabbuh Mansur Hadi of failing to respect the Gulf initiative which stipulated power-sharing between the president and the prime minister.

"This did not, however, happen, except for a brief period of time, following which it became a one-man show," added Basindawa.

He insisted that he and other cabinet members were kept in the dark about everything in the country, particularly security and military developments as well as Yemen's foreign relations.

On Saturday, United Nations Secretary-General Ban Ki-moon and his Special Advisor on Yemen Jamal Benomar said Yemeni parties had reached a deal to end the current crisis between the government and the Houthi group.

The resignation of Basindawa's government has long be one of the key demands of the Houthis.

Yemen has been dogged by unrest since a popular uprising that began in 2011 ousted longstanding president Ali Abdullah Saleh one year later.
Last Update: Sep 22, 2014 9:44 am
RELATED TOPICS