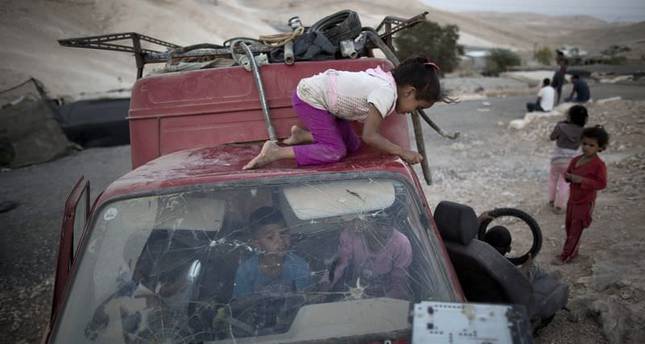 by Daily Sabah Sep 22, 2014 12:00 am
The U.N.'s Palestinian refugee agency (UNRWA) called on the international community to oppose the Israeli plan to relocate thousands of Palestinian Bedouins from their residential areas in the central West Bank to the newly created town of Nweima. "The Nweima plans, published on Aug. 25 and Sept. 9, indicate that the proposed move could lead to the transfer of as many as 12,000 individuals. The humanitarian impact of the planned transfer could be immense," said UNRWA Commissioner General Pierre Krähenbühl on Sunday. "Forcible transfer" is in contravention of the Fourth Geneva Convention according to UNRWA, and this plan may further Israeli illegal settlement expansion in the West Bank.

Israeli authorities, viewing Bedouin residents as squatters in illegal settlements, defend the relocation plans as legalizing the status of the Bedouins. The Israeli military's department responsible for civil affairs in the occupied West Bank said to AFP that several plans to rehouse Bedouins in places with suitable infrastructure was being conducted in consultation with the community. However, Haaretz newspaper said the plan to move about 12,500 Bedouins from the Jahalin, Kaabneh and Rashaida tribes was drafted without any dialogue with them.

The Bedouin community, living under the daily threat of displacement, has continually opposed its relocation. As Palestine refugees, the Bedouins wish to be allowed back to their traditional lands in the Negev. In April 2014, the Israeli authorities made public a plan to relocate rural Bedouin communities living throughout the West Bank.