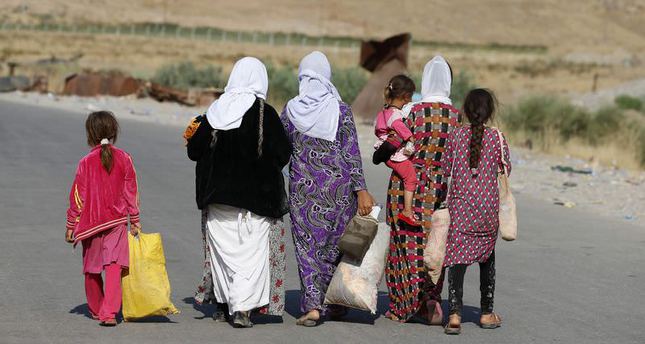 by AA Sep 22, 2014 12:00 am
Turkey urgently needs assistance from the international community to help it host the massive influx of refugees from Syria into the country, the UN Refugee Agency has said.

Batchelor told The Anadolu Agency: "This is an international responsibility. The question is what will the international community do to provide support and solidarity to that state [Turkey] to ensure that the capacity is there?"

"We appeal to all countries to increase their aid."

"People are deeply fearful. This is no longer an issue of access to food or water. They are fleeing for their lives," she said, adding that the number of refugees would probably increase.

Turkey has already taken in more than 840,000 registered Syrian refugees since the start of the Syrian civil war in March 2011.

Officials estimate that the exact figure is about 1.35 million.

Batchelor went on: "Turkey is probably hosting the largest number of Syrians. There are 1.35 million Syrians already here. Now possibly more than 100,000 have arrived over the space of two days.

"This is obviously a massive number of refugees arriving within such a short time -- one that would stretch the capabilities of even the most resourceful countries."

She said: "We are very grateful. Turkey has been extremely consistent. Prime Minister Davutoğlu issued a statement saying that all these people have been received and welcomed.

"The Turkish people have been very supportive, helpful and generous."

"Turkey has been very responsive. They have saved the lives of these people," Batchelor added.

However, she said that all the refugees fleeing to Turkey were not the responsibility of Turkey alone and underlined the need for increased global assistance and support.

"We have ... just received in Turkey $20 million in aid from the United States," Batchelor said, adding that the sum brought the US' contribution to Turkey for 2014 alone to more than $50 million.

But she pointed out: "Last year, we had 37 percent of what we requested. This year, it is September, and we have only 21 percent."

Asked why Turkey's percentage of UNHCR funding was lower than any of the other host countries including Iraq, Jordan, Lebanon, Egypt, and also within Syria itself, Batchelor said she believed there was "some misunderstanding" relating to a misconception that Turkey was reluctant to accept aid.

She said the UNHCR had sent 20 truckloads of basic relief items to Turkey's southeast province of Şanlıurfa including thousands of blankets, bed mats, jerry cans and plastic sheeting, in the past 24 hours.

She said: "We are now doing airlifts with tens of thousands of core relief items including kitchen sets.

"If we received more international support, the UN could do more with core life-saving items, better assisting Turkey in the very robust response that it has provided."

Batchelor said the UNHCR would be making appeals and she was hopeful that funding would increase in the short term.

She said she believed "robust support" was essential not only to save lives, but to also provide education for children.

She went on: "We'd like to see the day where Syrians can return to their country and rebuild. They won't be able to do that if they haven't been helped.

"If the children don't have an education, if the adults aren't able to survive, then we're looking at years and years of conflict."