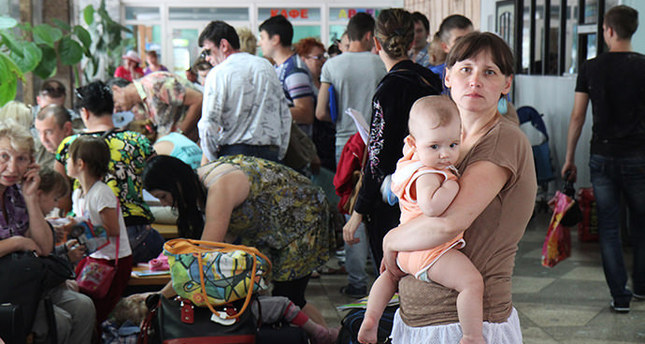 by Daily Sabah Sep 24, 2014 12:00 am
According to a U.N. report, the human rights situation in the east and southeast of Ukraine has severely deteriorated. The report, released by the United Nations Human Rights Council (UNHRC) on the U.N. Human Rights Monitoring Mission to Ukraine, reviews human rights violations during the period from Nov. 21, 2013, to Sept. 5 in war-torn Ukraine. The registered death toll has climbed to at least 3,543, which includes the 298 victims of the Malaysian Airlines plane crash that was allegedly shot down by Russia-backed rebels on the Ukraine-Russia border, the report says. It also underscored serious human rights violations in the embattled east and in Crimea.

The U.N. Assistant Secretary-General for Human Rights, Ivan Simonovic, pointed out that the humanitarian conditions have worsened for pro-Ukrainian Crimeans, especially the Crimean Tatar ethnic group. "Human rights abuses committed by the armed groups in the areas under their control include abductions, killings, physical and psychological torture, ill-treatment and other serious crimes," he said.

The situation of the region's minority population, the ethnic Crimean Tatars, is extremely vulnerable since the Russian military annexed the Crimean peninsula. After the introduction of Russian federal legislation in Crimea, many Crimean Tatars have been struggling with moral terror in everyday life such as intimidation and discrimination they have faced "particularly in the areas of education, employment and property rights." The mistreatment of the defenseless minority has incessantly continued. Crimean Tatars, composing 12 percent of Crimea's largely ethnic Russian population of about two million, have been highly critical of Moscow's annexation of the peninsula that was previously governed by Ukraine.

Considering the internally displaced Ukrainians who have been suffering from worsening living conditions due to the ongoing violent clashes, "In one month between early August and early September, the number of registered displaced persons has doubled, reaching 275,498 registered as of Sept. 18. However, the majority of internally displaced persons seemed to be unregistered, and the actual number could therefore be much higher," Simonovic said.

Meanwhile, amid mutual accusations of violations, the cease-fire agreement has largely held in eastern Ukraine despite reports of scattered fighting in Donetsk. After rebels said they began pulling back their artillery from several cities they seized, Russian troops reportedly withdrew many troops from Ukraine, as part of the Minsk Accord signed on Sept. 5.

The clashes between the Ukrainian security forces and the pro-Russian separatists have turned the east of the country into a battle zone since the crisis erupted in April. After pro-Russian rebels declared the self-proclaimed Donetsk People's Republic in April, instability and chaos has prevailed in eastern Ukraine.