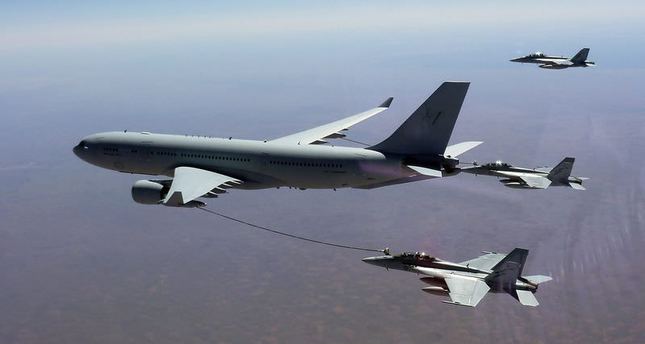 by Oct 06, 2014 12:00 am
Australian fighter jets have flown their first armed combat mission in Iraq against ISIS but did not launch air strikes, the military said Monday.

"The Super Hornets were on-call to attack targets as identified."

"On this occasion the aircraft did not use their munitions and have returned to base to disarm and prepare for future sorties."

The flights are the first since the Australian government on Friday authorised strikes on ISIS militants in Iraq.

Australia is part of the international coalition conducting an air campaign against the ISIS that the United States has been building since first launching air strikes in August.

Like France, Britain, Denmark, Belgium and the Netherlands, Australia has limited its operations to Iraq. The United States and several Arab coalition partners have been conducting air strikes against ISIS militants in Syria.

Former chief of the Australian army Peter Leahy said it was normal for jets to return from missions without carrying out airstrikes.

"You would expect something like this to happen, particularly as we want to minimise collateral damage. We don't want to be hitting the wrong target," he told the Australian Broadcasting Corporation.

"What we have seen from ISIS over the last week or so is that they've made themselves a much harder target... they've dispersed, they're adapting camouflage patterns, they've moved back inside the cities and getting close to the forces and holding on. "

IS militants have seized swathes of Iraq and Syria, declaring a "caliphate" and imposing a harsh interpretation of Islamic law.

"The beheadings, the crucifixions, mass executions, ethnic cleansing and sexual slavery that are occurring in northern Iraq and Syria, are only the beginning if ISIS has its way," he said on Saturday.

Australia deployed some 600 troops and several aircraft to the United Arab Emirates in mid-September as it geared up to join the US-led international coalition.

It wants to deploy special forces to Iraq to advise and assist Iraqi forces but is awaiting approval from the Iraqi government.

Australia's involvement in Iraq has the support of both Abbott's conservative coalition and the opposition Labor Party.

"This is a humanitarian mission that is important for the peace and freedom of the people of Iraq and also for global stability and global peace," Labor's Chris Bowen said.

"The mission obviously will have many iterations. This is the first," he told Sky News.
Last Update: Oct 06, 2014 1:22 pm
RELATED TOPICS