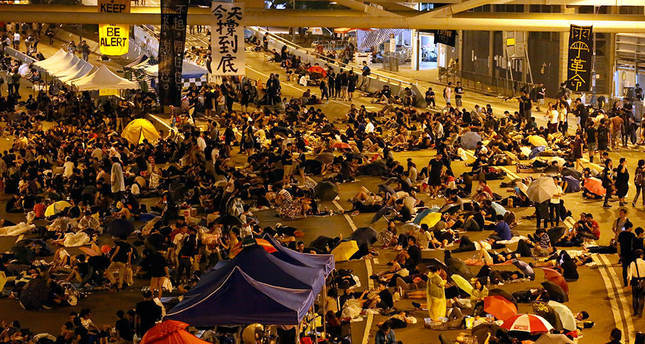 by Associated Press Oct 06, 2014 12:00 am
Passionate student-led protests for democratic reforms in Hong Kong subsided Monday but a few hundred demonstrators remained camped out, vowing to keep up the pressure on the government until officials show they are sincere in responding to their demands.

Schools reopened and civil servants returned to work Monday morning after protesters cleared the area outside the city's government headquarters, where they had gathered for more than a week.

About 25 protesters, mostly students, refused to budge from the site, and some say they plan to stay for as long as they can. Another couple hundred protesters remained in the Mong Kok area where some scuffles broke out over the weekend.

Parts of a main thoroughfare through the heart of the business district remained closed.

Student demonstrators say they have taken early steps to begin talks with the government on their demands for wider political reforms, but actual negotiations have not started and many disagreements remain.

Tens of thousands of people, many of them students, have poured into the streets of the semi-autonomous city since Sept. 28 to peacefully protest China's restrictions on the first direct election for Hong Kong's leader, promised by Beijing for 2017. The protests are the strongest challenge to authorities in Beijing since the former British colony returned to Chinese rule in 1997.

China has promised that Hong Kong can have universal suffrage by 2017, but it says a committee of mostly pro-Beijing figures must screen candidates for the top job. The protesters also are demanding the resignation of Hong Kong Chief Executive Leung Chun-ying, the city's current leader, but he has refused to step down.

Some activists disagree with the partial withdrawal at government headquarters, and an alliance of students say they will keep up their protests until details of the talks are worked out. They say they will walk away from the talks as soon as the government uses force to clear away the remaining protesters.

Alex Chow, a student leader, said he was not worried about the crowd dwindling.

"Because people need rest, but they will come out again. It doesn't mean the movement is diminishing. Many people still support it," Chow said.

But Louis Chan, who still plans to stay at the government headquarters for "as long as he can," is not sure achieving universal suffrage the students' original goal is now likely.

"I think it was possible, but now I don't think so because they (the Hong Kong government) don't give any response and China is also very much against this," he said.

Police said they had arrested 30 people since the start of the protests. Protesters, meanwhile, complained the police were failing to protect them from attacks by mobs intent on driving them away.
Last Update: Oct 06, 2014 10:40 am
RELATED TOPICS