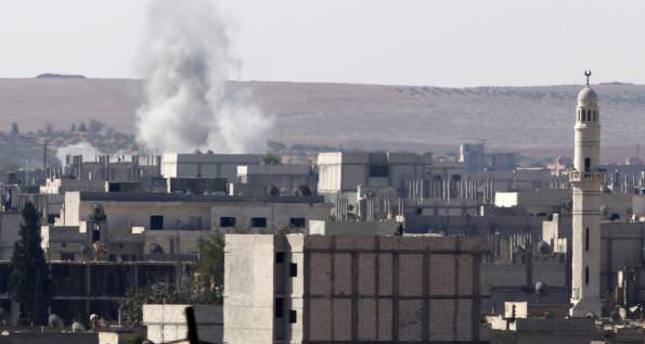 by Oct 06, 2014 12:00 am
Outgunned Kurdish fighters vowed on Monday not to abandon their increasingly desperate efforts to defend the Syrian border town of Kobani from ISIS militants pressing in from three sides and pounding them with heavy artillery.

The radical al Qaeda offshoot has been battling for more than two weeks to seize the predominantly Kurdish town, driving 180,000 people into neighboring Turkey.

Air strikes by American and Gulf state warplanes have failed to halt the advance of the ISIS militants, who moved to the outskirts of the town over the weekend and were battling to secure a strategic hilltop in the face of fierce resistance.

Despite the heavy fighting, which has seen mortars rain down on residential areas in Kobani and stray fire hit Turkish territory, a Reuters reporter saw around 30 people cross over from Turkey, apparently to help with defense of the town.

"Fighting continues, they are also firing mortars at the heart of the town. We have light weapons only," Esmat al-Sheikh, head of the Kobani Defence Authority, said by telephone.

"If they enter Kobani, it will be a graveyard for us and for them. We will not let them enter Kobani as long as we live. We either win or die. We will resist to the end," Sheikh said as heavy and light weapons fire echoed from the eastern side of town.

Ismail Eskin, a journalist in the town, said morale was still high "because the people are protecting their own soil".

"They will not allow (ISIS) to occupy Kobani," he said.

ISIS wants to take Kobani to consolidate a dramatic sweep across northern Iraq and Syria.

Beheadings, mass killings and torture have spread fear of the group across the region, with villages emptying at the approach of pick-up trucks flying ISIS's black flag.

One female Kurdish fighter near Kobani blew herself up on Sunday after running out of ammunition, rather than be captured by ISIS, a monitoring group and local sources said.

"They have ammunition, but it is so little," said Pawer Mohammed Ali, a translator for the Kurdish Democratic Union Party (PYD) inside Kobani. "The PYD are just appealing to foreign forces for ammunition because (Islamic State) is using heavy weapons, tanks and mortars."

On Sunday, Islamic State released a video apparently showing its fighters in control of radio masts on top of Mistanour hill, which looks out over the town and would offer valuable high ground. Reuters was not able to independently verify the contents of the video.

Ali said fighting for control of Mistanour hill was continuing, and denied reports that IS fighters were in the streets of Kobani. He said Kurdish forces were holding them back but the situation in the town, where water and power had been cut off, was increasingly desperate.

Turkish hospitals have been treating a steady stream of wounded Kurdish fighters being brought across the frontier. Witnesses who had fled Kobani said that old women were being given grenades to throw, and young women with no fighting experience were being armed and sent into battle.

Kobani's Kurds have so far received little help from elsewhere. Turkey has given shelter to the bulk of the area's refugees, and its doctors have treated the wounded, but it has given no suggestion that it could join the fight against Islamic State, beyond gestures of self-defense.

Over the weekend, President Tayyip Erdogan vowed to retaliate if Islamic State attacked Turkish forces, and on Monday Turkish tanks deployed along the border for the second time in a week, some with guns pointing towards Syria, apparently in response to stray fire crossing the frontier.

Still, Islamic State's release last month of 46 Turkish hostages, and a parliamentary motion last week renewing a mandate allowing Turkish troops to cross into Syria and Iraq, have raised expectations that Ankara may be planning a more active role.