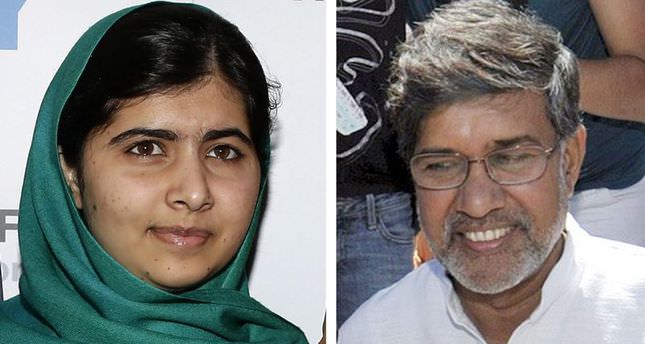 by Associated Press Oct 10, 2014 12:00 am
Malala Yousafzai of Pakistan and Kailash Satyarthi of India were jointly awarded the Nobel Peace Prize on Friday for their work for children's rights.

The Norwegian Nobel Committee cited the two "for their struggle against the suppression of children and young people and for the right of all children to education."

Malala, 17, is the youngest ever winner of a Nobel Prize. A schoolgirl and education campaigner in Pakistan, she was shot in the head by a Taliban gunman two years ago.

Satyarthi, 60, has maintained the tradition of Mahatma Gandhi and headed various forms of peaceful protests, "focusing on the grave exploitation of children for financial gain," the Nobel committee said.

The Nobel Committee said it "regards it as an important point for a Hindu and a Muslim, an Indian and a Pakistani, to join in a common struggle for education and against extremism."

Malala was barely 11 years old when she began championing girls' education, speaking out in TV interviews. The Taliban had overrun her home town of Mingora, terrorizing residents, threatening to blow up girls' schools, ordering teachers and students into the all-encompassing burqas.

She was critically injured on Oct. 9, 2012, when a Taliban gunman boarded her school bus and shot her in the head. She survived through luck the bullet did not enter her brain and by the quick intervention of British doctors who were visiting Pakistan.

Flown to Britain for specialist treatment at the Queen Elizabeth Hospital in Birmingham, she underwent numerous surgeries, but made a strong recovery.

Malala currently lives with her father, mother and two brothers in the English city of Birmingham, attending a local school. She has been showered with human rights prizes, including the European Parliament's Sakharov Award.

Satyarthi has been at the forefront of a global movement to end child slavery and exploitative child labor since 1980 when he gave up a career as an electrical engineer.

As a grassroots activist, he has led the rescue of tens of thousands of child slaves and developed a successful model for their education and rehabilitation.

The founder of the Nobel Prizes, Swedish industrialist Alfred Nobel, said the prize committee should give the prize to "the person who shall have done the most or the best work for fraternity between nations, for the abolition or reduction of standing armies and for the holding and promotion of peace congresses."

The committee has interpreted those instructions differently over time, widening the concept of peace work to include efforts to improve human rights, fight poverty and clean up the environment.

"The struggle against suppression and for the rights of children and adolescents contributes to the realization of the "fraternity between nations" that Alfred Nobel mentions in his will," the committee said.

The Nobel Prizes in medicine, chemistry, physics and literature were announced earlier this week. The economics award will be announced on Monday.