ISIS captures army base as it advances in western Iraq 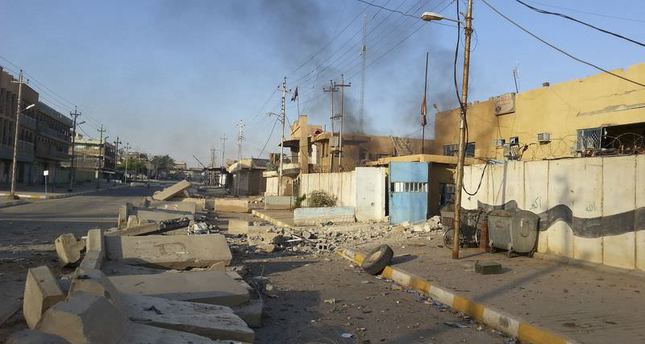 by Oct 14, 2014 12:00 am
Self-proclaimed Islamic State of Iraq and al-Sham (ISIS) seized an army base Monday in the Iraqi town of Hit as they continued their advance in the western province of al-Anbar, local media reported.

Al-Mada Press reported the base fell after hours of clashes.

Security forces have evacuated detainees from prisons in and around al-Anbar provincial capital al-Ramadi to detention sites in Baghdad, al-Mada Press reported separately.

The ISIS advance threatens to cut off remaining Iraqi security forces in the Sunni-dominated province, which stretches from the western outskirts of Baghdad to the Syrian border.

The United Nations said Sunday that the clashes around Hit have displaced some 180,000 people, many of whom were themselves previously displaced from other areas.

The blasts targeted the Kadhimiyah, Sadr City and Habibiyah districts, the agency reported.

Earlier, police officials said that 24 Islamic State fighters were killed and 16 wounded when Kurdish Peshmerga forces shelled a training camp where the militants were holding a graduation parade for recruits, near al-Muqdadiyah north-east of Baghdad.

A car bomb attack killed 10 civilians and injured nine in the centre of al-Muqdadiyah, the officials said.

Hammond said the British government was playing its part to counter ISIS with direct airstrikes on the militants, as well as providing military equipment and training for Kurdish forces.

Hammond backed calls by UN Iraq envoy Nickolay Mladenov for ministers from the autonomous Kurdish region to take their places in the Baghdad government.

The Kurds have been seeking to resolve a dispute over budget allocations and control of oil resources before agreeing to join al-Abadi's government, which they backed at the last minute under international pressure.

In neighbouring Syria, a monitoring group said ISIS had gained ground in street-to-street fighting in the border town of Kobane, despite fierce resistance by its Kurdish defenders.

The ISIS captured the city's cultural centre as they pressed toward Kurdish holdouts in the centre of the town, the Syrian Observatory for Human Rights said.

The US-led coalition continued its air raids around Kobane, hitting the area around the cultural centre, the Observatory said.

Idris Nassan, deputy foreign affairs minister in the Kobane administration, earlier told dpa that, following fierce clashes overnight, the Kurdish People's Protection Units (YPG) had been able to advance into a commercial zone north-east of the city, located near the Turkish border.

He said the Kurdish fighters were able to advance into an area south-west of Kobane "where they managed to push away Islamic State fighters."

The commander of the Kurdish Women's Protection Units in Kobane, Meysa Abdu, said Turkish border forces had told the Kurdish defenders to move away from the Mursitpinar border crossing between the two countries, which is the town's only lifeline.

The border area came under shelling during the afternoon, while a suicide blast took place nearby, the Britain-based Syrian Observatory for Human Rights said.

The monitoring group said clashes were taking place to the west of a security compound in the centre of Kobane, which the militants captured Friday.

Syrian government warplanes and helicopters pounded rebel held-areas for the second day running, with 38 air raids on areas between the cities of Hama and Aleppo, following 54 the previous day, according to the Observatory.

The US Joint Chiefs of Staff hosted a meeting later Monday with defence ministers of the coalition against the ISIS to discuss further strategy.

Complicating matters for the coalition against the jihadists, Turkey Foreign Minister Mevlut Cavusoglu denied any deal was reached between Washington and Ankara on the use of the Incirlik Air Base in southern Turkey for attacks against Islamic State targets.

The matter, along with other open issues, remained under discussion, Cavusoglu said.

US national security advisor Susan Rice had said Sunday that the Turks "have said that their facilities inside of Turkey can be used by the coalition forces" for attacks in Syria and Iraq.