Pro-Palestinian events at US campuses on rise 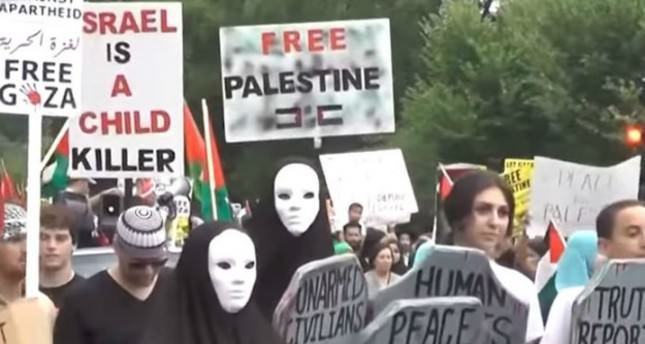 by AA Oct 27, 2014 12:00 am
Anti-Defamation League reports a 114-percent increase in number of pro-Palestine events at US colleges after Israel's summer onslaught on Gaza.

Pro -Palestinian activism has risen significantly on U.S. campuses since Israel's offensive on theGaza Strip in the summer, according to a Jewish civil society organization.

The New York-based Anti-Defamation League said in a report published Friday that there had been 75 "anti-Israel" events scheduled on U.S. campuses since the beginning of the 2014-2015 academic year, which started in late August or early September at most American universities.

Israel's recent offensive in the Gaza Strip began July 7 and lasted for 51 days; it killed more than 2,000 Palestinians, mostly civilians, according to Palestinian health officials. More than 10,000 others were reported injured.

It said nearly 40 percent of those events were held in support of an international campaign to seek boycott against Israel.

The Boycott, Divestment and Sanctions movement, known by the initials BDS, calls for various forms of boycott against Israel until it ends its occupation of Palestinian lands.

The report also said pro -Palestinian protestors on U.S. campuses drew parallels between Israeli actions inGaza and the shooting of a black teenager, Michael Brown, by a white police officer in Ferguson, Missouri.

It mentions a particular "die-in" protest at John Jay College in New York, in which many students reportedly chanted slogans such as "from Ferguson to Palestine, Inifada Intifada," referring to two popular Palestinian uprisings aimed at ending the Israeli occupation.

Brown, an unarmed black teenager, was shot and killed by a white police officer, Darren Wilson, on August 9. His death set off mass protests, which have since continued at various levels in the country.