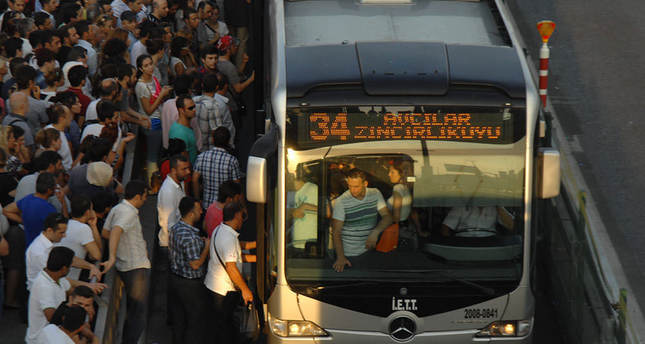 by Oct 29, 2014 12:00 am
Trains, buses and taxis for women only are on the rise in cities globally with a Thomson Reuters Foundation survey finding women feel safer on single-sex transport but gender experts dismissing this as a band-aid solution that could backfire for women.

A poll of nearly 6,300 women in 15 of the world's largest capitals and in New York, the most populous city in the United States, found about 70 percent of women said they would feel safer in single-sex areas on buses and trains.

Manila in the Philippines was the city where women were most in favour of single-sex transport, backed by more than nine in 10 women, or 94 percent, followed by Jakarta in Indonesia, Mexico City and Delhi in India.

By contrast women in New York saw the least need for such a move, with only 35 percent support, followed by women in Moscow, London and Paris.

The survey of an average of about 400 women in each city, conducted online by YouGov, comes as more cities introduce women-only transport and taxi companies catering only for women emerge in cities ranging from Delhi to Kuala Lumpur to New York.

Gender and city planning experts raised concerns over the effectiveness of women-only transport.

"I think that it's incredibly insulting to the vast majority of men but it is also failing female passengers not to tackle the problem at its root," said Laura Bates, founder of the anti-harassment Everyday Sexism Project in London.

The world's largest capital, Tokyo, was one of the first, from 2000, to introduce women-only cars on trains to stop women being abused. It has been followed by Mexico City and Jakarta, among others, while some, like London, are mulling the idea.

Some women in Turkey also call for female-only buses for a 50 km bus rapid transit route called "Metrobüs" in Istanbul, saying that they want more comfortable travel. A group of activists from Turkey's Felicity Party (FP) collected some 60,000 signatures in 2012 in their campaign for such buses and said they would continue their rallies until the Istanbul Municipality responds to their call.

The trend to offer women-only transport as well as more police on patrol and off-beat solutions such as anti-groping gloves in Japan comes as reports of women being abused rise and studies link safe transport to female economic empowerment.

But Julie Babinard, senior transport specialist from the World Bank, said women-only carriages were a short-term fix and not a panacea for harassment of women.

"The emerging interest in several countries in women-only initiatives should be seen as an opportunity for improving security in cities but not as a silver bullet for dealing with gender-based violence in transportation and urban settings," Babinard told the Thomson Reuters Foundation.

"Women-only initiatives are not likely to provide long-term solutions as they only segregate by gender and provide a short-term remedy instead of addressing more fundamental issues."

Although experts remain critical of single-sex transport, most women favoured the idea, according to the survey.

This was a side question to a larger poll of women and gender experts about safety on transport that ranked the Latin America cities of Bogota, Mexico City and Lima in Peru as having the most dangerous transport for women.

"Sometimes I go to the women's area especially when I observed that there are a lot of boys in my lane," Claudine Saldua, a 21-year-old student, told the Thomson Reuters Foundation.

New Yorkers and Londoners saw little need for such a move although British Transport Minister Clare Perry last month said she would consider women-only carriages on the London underground, known widely by its nickname the Tube.

"I've never felt unsafe on the Tube or trains in London .. I wouldn't actively seek out a women-only carriage," said Laura Howley, 29, a personal assistant working in London.

"I think there could be a backlash against women because of it and maybe create an anti-female feeling."

Emily May, co-founder of anti-harassment group Hollaback! in New York, said there was no "one size fits all" solution to stop harassment on transport but it was critical to address as women gave up jobs and even moved home due to transport fears.

"There certainly are people in some countries in which women-only carriages have been implemented that love them and feel so much safer because of them," May said.