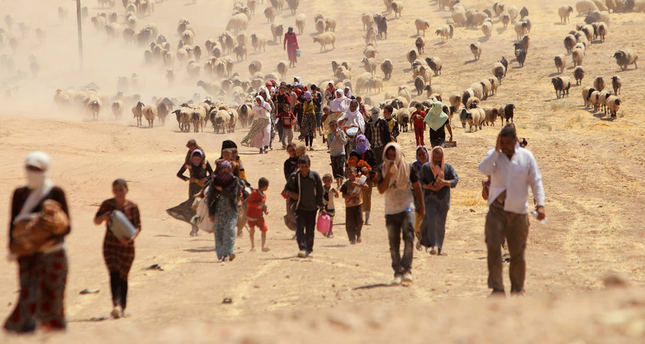 The U.N. launched a 10-year global campaign in order to draw attention to the inhumane situation of stateless people as at least 10 million people worldwide suffer from statelessness

Considering the growing number of children born without birth registration in exile or in refugee camps, "A stateless child is born every 10 minutes in just five countries," the U.N. refugee agency said.

As regions around the world suffer from the growing number of major conflicts in the Middle East and Africa and Asia millions of people have been forced to flee, becoming refugees or internally displace people.

The Rohingya, a Muslim ethnic group in Myanmar, are one of the most vulnerable ethnic groups that suffer from statelessness. About 140,000 stateless Rohingya have been internally displaced due to increasing violent attacks by Buddhists. Their citizenship has been refused because of their ethnicity under the 1982 citizenship law and their freedoms of movement, religion and education have been severely restricted. Their living conditions are getting worse as they have no permission to leave the camps, most are unemployed without a source of income and they rely on the World Food Program to survive. Due to the fact that government authorities see them as illegal immigrants from neighboring Bangladesh, despite many families having lived in Myanmar for generations, they are not recognized as citizen of the country, making them a stateless community. The U.N. considers them one of the most persecuted minorities in the world.

More than 6,000 people of Indonesian descent live in the Philippines with undetermined citizenship status. Due the fact that neither Indonesia nor the Philippines recognizes them as citizens, they have been living under worsening humanitarian conditions with "poor access to employment, livelihood, education and clean water." said Precious Pojas, senior state counsel at the Ministry of Justice, according to the U.N.'s refugee agency report on the stateless people in the Philippines released on Sept. 15. "Given the uncertainty of their status, they suffer discriminatory treatment in employment because they are considered as aliens by most people. There is a threat they would be deported, especially if they do not comply with our labor laws," Pojas said. Despite amendments to the Indonesian 1958 Citizenship Law in 2006, reacquiring Indonesian citizenship for many stateless person has remained unresolved.

European states have also tackled statelessness, which is seen as a major challenge in the 21st century. There are more than 600,000 people in Europe alone whose rights and services have been denied by the state, as they have no legal bond to any state. The dissolution of the Soviet Union in 1991 and the violent break-up of Yugoslavia in two stages from 1992 to 1995 and 1998 to 1999 have left some groups of people vulnerable as they fell between the cracks created by new nationality laws and thus became stateless. "More than 370,000 people lack a nationality in Estonia and Latvia," said the European Network on Statelessness, indicating more stateless people are expected to migrate to Europe.

The Roma in southeastern Europe still face serious challenges as hundreds of thousands of Roma hold no citizenship. During Nicolas Sarkozy presidency, France repatriated thousands of Roma as part of a government program. The French government has faced severe criticism as it applied the harshest policy in Europe toward Roma immigrants.

As the Middle East has been suffering from extremist threats and civil wars, the rampant situation has led many people to be displaced and seek refuge in neighboring countries. Over 3 million Syrian people are registered as refugees in neighboring countries; Jordan, Lebanon and Turkey and more than 6.5 million people are internally displaced inside Syria, according to the U.N. refugee agency.

Since the beginning of the Syrian civil war in 2011, more than 50,000 children have been born in Syrian refugee camps in neighboring countries. Syrian refugee women living in Lebanese and Jordanian refugee camps have showed the significance of the issue as many children born in refugee camps could end up stateless. "We are making a big effort in Lebanon and Jordan to improve the conditions of birth registration," said U.N. chief Guterres. "Seventy percent of the newborn Syrian refugees in the neighboring countries have not yet been registered, they do not have legal birth certificates," he said. Syrian born Kurdish people and Palestinians under Israeli occupation and living in Jordan are among group of people suffer from statelessness in the Middle East region. Istanbul/ Daily Sabah