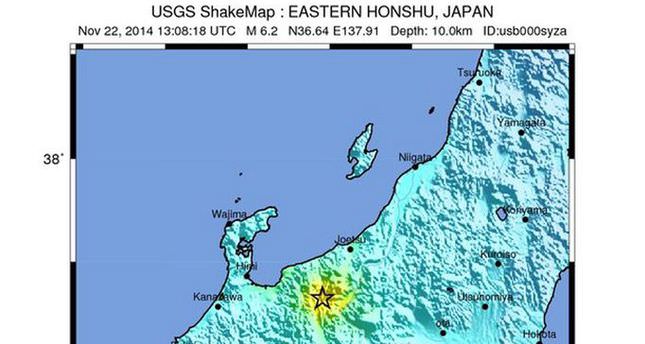 by reuters
Nov 22, 2014 12:00 am
An earthquake with preliminary magnitude of 6.8 jolted central Japan on Saturday evening, the Japan Meteorological Agency said, adding that no tsunami warning had been issued.

High-speed trains were halted and there were reports of damage to homes and some unconfirmed injuries after the quake, which was felt in the capital Tokyo 180 km (110 miles) away, NHK public TV said.

There were no signs of irregularities at Tokyo Electric Power Co's (TEPCO) Kashiwazaki Kariwa nuclear plant, a spokesman for the utility said, adding checks were still being made at the facility, where all reactors are currently off-line.

NHK quoted an official in the village of Ogawa near the epicentre as saying there was a long tremor and documents fell off shelves.

NHK said there was a report of a landslide blocking roads near a ski resort in the area.