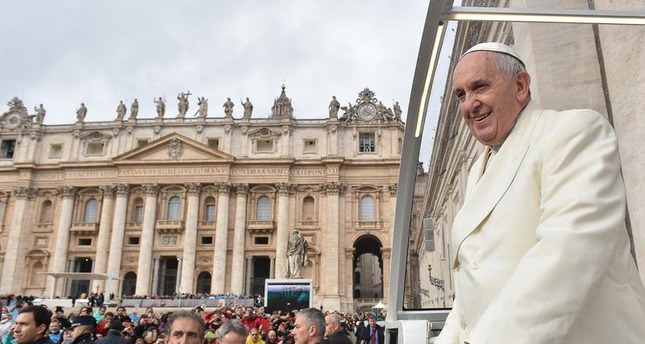 by Daily Sabah Dec 03, 2014 12:00 am
Pope Francis praised Turkey and Turkish officials on Wednesday for their hospitality during his visit to Turkey in St. Peter's Square.

The pope thanked Turkey for all the good and 'hidden' work they do for countless Iraqi and Syrian refugees and called on the spectators to pray to God that it may bear fruits of dialogue in the relations with Orthodox Christians and Muslims.

He reiterated his gratitude to Turkish President Recep Tayyip Erdoğan, Prime Minister Ahmet Davutoğlu, the President for Religious Affairs Mehmet Görmez and other authorities, who welcomed him with respect in his visit.

Pope Francis visited Turkey on November 28-30, from Friday through Sunday. He spent one day in Ankara, the capital, followed by two days in Istanbul, the nation's largest city and met top officials including President Erdoğan, PM Davutoğlu and the head of the Presidency of Religious Affairs, Mehmet Görmez, as well as the Fener Greek Patriarch, Bartholomew I, with whom he signed a declaration towards overcoming hurdles that perpetuate the split between the Catholic and Orthodox churches.