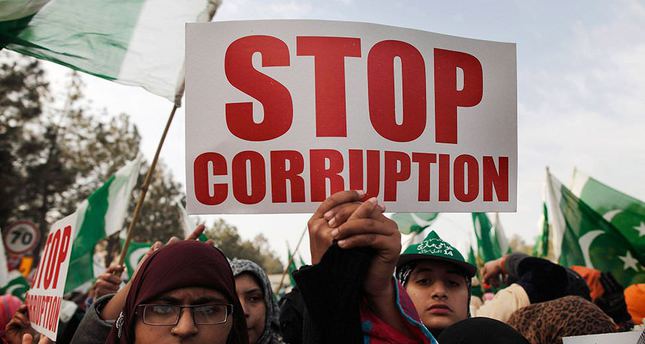 by AA Dec 03, 2014 12:00 am
Denmark, with 92 points out of 100, is the least corrupt country in the world, according to corruption researcher Transparency International.

Denmark is listed at the top of the 175-country index, which ranks countries and territories based on a survey of levels of crime in the public sector. Countries are rated on a scale of zero to one hundred -- most corrupt to least corrupt.

Turkey dropped slightly in the scale this year, to 45 points, placing it close to the middle level of the index at 64. However, Turkey suffered the biggest drop of any country in the survey.

Pakistan, on the other hand, moved up to the 126th position with 29 points.

Corruption poses a significant risk to a country's economy, warned Finn Heinrich, research director of Transparency International at a press conference in the Federal Press Center in Berlin on Wednesday.

"Corruption undermines the effectiveness of the state administration," he said. Corruption is also a significant risk for investors when deciding what countries to invest in.

Says José Ugaz, the chair of Transparency International: "Corrupt officials smuggle ill-gotten assets into safe havens through offshore companies with absolute impunity. "Countries at the bottom need to adopt radical anti-corruption measures in favor of their people. Countries at the top of the index should make sure they don't export corrupt practices to underdeveloped countries."

The Scandinavian countries, together with New Zealand, are at the top of the list.

Transparency International official Edda Mueller, pointed out that 121 countries, a majority out of the 175 countries under consideration, are in the middle range of the index at about 50 points.

Mueller also said China is at a the low level of 36 points, ranked 100 on the list. Somalia and North Korea are at the bottom of the list, each with 8 points.