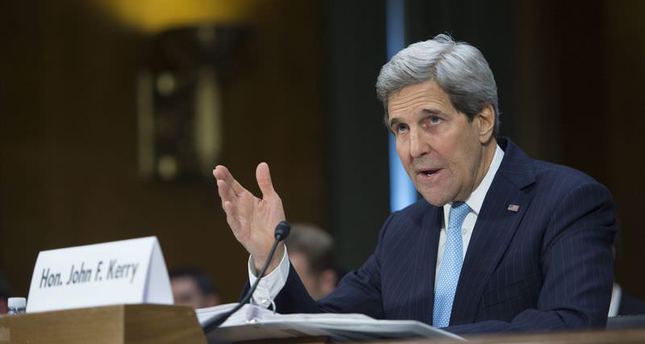 The U.S. Secretary of State John Kerry asked Congress on Tuesday for expanded legal authorization to fight ISIS, including the use of ground troops and with no geographical limitations.

President Barack Obama has repeatedly said military operations against the terror group would not include U.S. ground forces.

But in testimony before the Senate Foreign Relations Committee on the "Authorization for the Use of Military Force (AUMF) against ISIS", Kerry said no ground troops "does not mean we should preemptively bind the hands of the commander-in-chief-or our commanders in the field-in responding to scenarios and contingencies that are impossible to foresee."

He asked lawmakers to work with the administration "to develop language that provides a clear signal of support for our ongoing military operations against ISIS."

The new authorization "should give the president the clear mandate and flexibility he needs to successfully prosecute the armed conflict against ISIS and affiliated forces," he said.

Committee chairman, Sen. Bob Menendez, suggested a three-year limitation of the new powers but said that if the White House wants new authorization, it should have sent suggested language to Congress months ago.

Sen. Tim Kaine, argued that Congress should make decision on the proposal before the holidays, because he says US soldiers are dying overseas, and are already on ground. "We are at war ... Congress has been silent about this," he said.

Sen. Bob Corker of Tennessee, who is set to become the next head of the committee when Republicans take control of the Senate in January, said he supported of the provisions but warned that the Obama administration has not cleared up how do defeat ISIS.

"From my standpoint, I would like to have something much more full, much more understood, a strategy that is laid out in a way that I understand where we are going prior to authorizing a complete authorization," Corker said.

Sen. John McCain criticized the hearing as a "kind of charade" and asked Obama to present a draft strategy by January.

McCain also criticized the administration for not giving Syrian opposition forces the military equipment and weapons it needs to fight against Syrian President Bashar Assad who is "slaughtering" his people.