Time names Ebola fighters as 'person of the year' 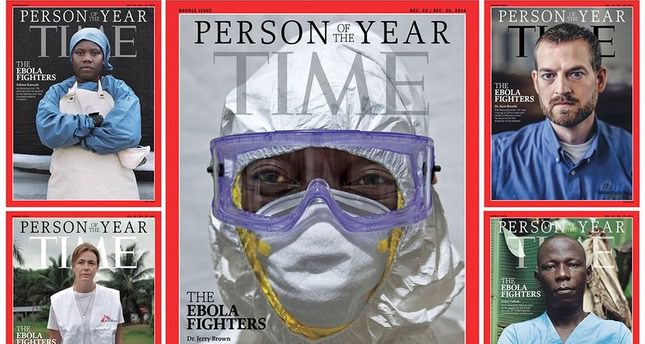 by Dec 10, 2014 12:00 am
Time magazine named its "Person of the Year 2014" on Wednesday as the medics treating the Ebola epidemic that has killed more than 6,300 people, paying tribute to their courage and mercy.

The hemorrhagic fever mushroomed from an outbreak into an epidemic in Liberia, Guinea and Sierra Leone, and there have been scattered cases in Nigeria, Mali, Spain, Germany and the United States.

"The rest of the world can sleep at night because a group of men and women are willing to stand and fight," wrote Time editor Nancy Gibbs, announcing the prestigious annual title.

"For tireless acts of courage and mercy, for buying the world time to boost its defenses, for risking, for persisting, for sacrificing and saving, the Ebola fighters are Time's 2014 Person of the Year."

The worst ever Ebola outbreak has left more than 6,300 people dead worldwide, nearly all in Sierra Leone, Guinea and Liberia.

Time said the virus struck doctors and nurses in unprecedented numbers, "wiping out a public-health infrastructure that was weak in the first place."

On Tuesday, the United Nation's Ebola czar, David Nabarro, welcomed widespread progress in the fight against the deadly virus, but warned the outbreak was still surging in western Sierra Leone and northern Guinea.

He said more foreign health workers and specialists were needed in areas where the disease was still spreading quickly, as were more treatment units and beds.

Gibbs said governments were not equipped to respond to the crisis, the World Health Organization was in denial and snarled in red tape, and first responders were accused of crying wolf.

She paid tribute to the people in the field, those sent by charities such as Doctors Without Borders, as well as local doctors and nurses, ambulance drivers and burial teams.

"Ebola is a war, and a warning. The global health system is nowhere close to strong enough to keep us safe from infectious disease," wrote Gibbs.
"And 'us' means everyone, not just those in faraway places where this is one threat among many that claim lives every day."