2014: A disastrous year for the MENA region 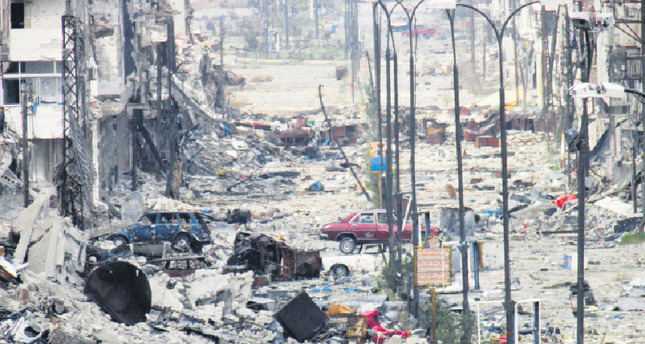 2014 saw serious escalation in violence in countries located in the Middle East and North Africa, especially Syria, Palestine and Iraq and Afghanistan, coming to the brink of dissolution

The Middle East and North Africa (MENA) region has endured one of its worst years in decades following clashes and conflicts that have spread across the region's countries. Only a few countries in the area, like Turkey, Saudi Arabia and Iran remained stable while many others were shaken either by clashes or political crises. The war in Syria, which is entering its fourth year, has affected the whole region due to international interventions and radical groups like the Islamic State of Iraq and al-Sham (ISIS) gaining strength. In Iraq, the fall of the provinces of Mosul and Anbar to ISIS caused trouble, while Israeli aggression toward Palestinians collapsed the peace talks. Yemen was also one of the conflict areas for central government forces, Shiite Houthi minority and al-Qaida insurgents who have torn the country apart. Libya has had its worst year since the ousting of former-President Moammar Gadhafi, as radical militants increased their activities, while tribal clashes also grew worse. In Ukraine, despite truce efforts between the Kiev administration and Russian-backed separatists, thousands of people died while hundreds of thousands have been displaced. While the war between Afghanistan and NATO and the U.S. ended after 13 years, they left behind thousands of refugees and countless dead, while Taliban insurgents still continue attacking civilians and government forces.

In the United Nations report entitled "Global Humanitarian Overview 2015," officials stated that the U.N. needs $16.4 billion to assist 57.5 million people in 22 countries in 2015, although 77.9 million people are in need. The report said $405.4 million for Afghanistan, $1.2 billion for Iraq, $735 million for the Occupied Palestinian Territories, $2.8 billion for Syria, $189.1 million for Ukraine and $615 million for Yemen are required. Besides these countries in the region, sub-Saharan African countries are also in a poor condition, suffering from similar problems to those in the MENA region.

This year was the deadliest of the war, according to the United Nations, with approximately 10,000 civilian casualties for the first time since the agency began keeping records in 2008. Most of the deaths and injuries were caused by Taliban attacks, the U.N. said. This has also been a deadly year for Afghanistan's security forces, army, paramilitary and police, with around 5,000 deaths recorded so far. "Afghanistan is in political, military and economic transition, marked by the election of a new president and the withdrawal of international troops. The continuing conflict, poverty, and cycle of natural disasters have led to high levels of humanitarian needs. A total of 105,800 people were displaced by conflict in Afghanistan in 2014. The safety of aid workers is of concern, with NGOs reporting 174 incidents this year. Since the start of military operations in Pakistan's North Waziristan, 225,000 people have fled to Afghanistan," the report said. The U.N. said 7.8 million people are in need, but only 3.8 million of them have been targeted for contact.

Iraq, which had been suffering from internal sectarian clashes ever since the U.S. invasion in 2001, was shaken when ISIS captured several cities in Sunni-dominated areas and committed unprecedented atrocities against its opponents, including Yazidis, Shiites and Sunnis. "Some 5.2 million people are in need of assistance throughout the country. 3.6 million people are living in areas under the control of ISIS and affiliated armed groups. Violations of human rights and international humanitarian law by all parties and against civilians of all ethnic and religious backgrounds continue to be committed. As many as 800,000 of an estimated 2.1 million people newly-displaced since January 2014 urgently need emergency shelter, and 940,000 require basic household items. The conflict has disrupted the public subsidized food distribution system, which more than 4 million Iraqis rely on, and at least 2.8 million people are now food insecure," the report said.

There were a number of factors that escalated tension between Palestine and Israel this year: the 52-day-long Israeli attacks on Gaza Strip last summer and the escalation of tension in Jerusalem and the West Bank after the storming of the Al-Aqsa compound by illegal Jewish settlers with Israeli security forces, and the approval of hundreds of illegal settlements despite condemnation from the international community. The attacks on Gaza left more than 2,000 dead and Israeli forces detained 1,266 Palestinian children in 2014. "In 2015, 1.9 million people, out of a population of 4.5 million will need humanitarian assistance. Key concerns include restricted access to basic services such as health, and education; continued high food insecurity and declining resilience; physical protection, forced displacement and the shelter needs of internally displaced peoples (IDPs)," the report said.

The month-long conflict in eastern Ukraine has come at a cost of an increasingly high death toll, with a large increase in the numbers of IDPs, according to the latest Ukraine situation report released by the United Nations Office for the Coordination of Humanitarian Affairs (OCHA). The OCHA figures show that 610,413 people were internally displaced as of Dec. 25, and 593,609 Ukrainians fled to neighboring countries as of Dec. 24. OCHA reported that there were "at least 4,771 people killed, including 298 on flight MH-17, and 10,360 wounded in eastern Ukraine as of Dec. 24." As the sporadic clashes continue in rebel-held areas, the Strategic Response Plan 2015 for Ukraine has yet to be announced. "The humanitarian community aims to assist 900,000 people in five regions of eastern Ukraine in 2015. These are the most vulnerable of the estimated 1.4 million people in need of assistance. The focus of response efforts in 2015 will be on the protection needs of the displaced and other conflict-affected people, provision of life-saving assistance to women, girls, boys and men and ensuring access to quality essential services," the report said.

Yemen, which suffers from instability and insecurity due to: the lack of a powerful central government, al-Qaida attacks, U.S. drone strikes and Houthi insurgents, is in a humanitarian crisis. Basic services in the country and endemic food security have almost collapsed while half the population lacks access to adequate water or sanitation facilities and 8.4 million people have insufficient access to health services. "Over 330,000 Yemenis remain displaced, mainly in the north of the country. In the south, an estimated 215,000 returnees need assistance to rebuild their lives. 250,000 refugees, mostly from Somalia, and tens of thousands of mainly Ethiopian migrants live in vulnerable conditions in Yemen. An estimated 700,000 Yemeni migrants expelled from Saudi Arabia require immediate life-saving assistance and protection upon arrival, adding to the pressure on scarce basic services," the U.N. report said.

Libya is on the brink of collapse and at risk of becoming a failed state as the security situation continues to severely deteriorate due to the ongoing deadly clashes between rival militias that threaten to tear the country apart. In the vacuum of Libya's political chaos, major armed militia groups have tried to seize control of vast areas. Benghazi and Tripoli have suffered from the escalating violence over the last few months due to increasing clashes between rogue brigades fighting. The two main armed militias, Zintanis and Misratans, have been fighting to seize control of key installations, especially the international airport. The clashes have killed hundreds of people while displacing thousands.

The Arab uprisings, which euphorically swept across the Middle East and North Africa, attracted Syrians who had lived under the dictatorship of the Assad family since 1970, when Bashar's father Hafiz Assad seized power. Since then, the majority Sunnis were forced to live in a police state that controlled every movement, organization or business through the use a wide-ranging intelligence service.

In March of 2011, Syrians were emboldened enough to raise their voices against the dictatorship. However, the regime's response was not as peaceful as the protests, and the country was subsequently dragged into a deadly civil war after opposition groups took up arms against the government. The opposition groups have also been divided internally. While moderate opposition groups like the Western-backed Free Syrian Army (FSA) were struggling for a democratic Syria where all religious and political groups would be free to exist, radical elements like al-Qaida's Syrian branch Nusra Front or ISIS aimed to establish a new Syria, ruled by an extremist religious jurisprudence. While the war continued among the groups and the regime forces, and other groups loyal to the regime like Iran-backed Hezbollah, the U.S. established an international coalition against ISIS in September after an American citizen was beheaded.

The U.N. report said, "Four years after the start of conflict, the humanitarian situation in Syria continues to deteriorate. 12.2 million people now require humanitarian assistance, including over 5 million children. Some 9.8 million people are food insecure, and 11.6 million in need of clean water and sanitation. Less than half of Syria's hospitals are fully functioning, and around a quarter of schools have been damaged, destroyed or converted into shelters, leaving between 2.1 and 2.4 million children out of school or attending classes irregularly. Syria remains the world's largest protection crisis. To date, over 191,000 people have been killed, including those from the impact of barrel bombs and around 1 million injured. Violations of international humanitarian law and human rights law continue. Palestinian refugees in Syria are also seriously affected with 64 percent displaced. Almost the entire Palestinian refugee population remaining in Syria is dependent on UNRWA to cover their basic needs. Some 7.6 million people are internally displaced and more than 3.2 million people have fled to neighboring countries Lebanon, Jordan, Turkey and Iraq as well as to Egypt. Essential services in these countries, such as health and education, have been placed under severe strain, and development gains achieved prior to the conflict are at risk of being reversed."

The pro-opposition Syrian Network of Human Rights said in a report released last week, that more than 39,000 people have been killed since the beginning of 2014. Out of the total, forces loyal to President Assad's regime killed 32,507. The death toll of civilians was 24,430, including 3,629 children and 3,714 women; 8,077 of the 32,507 were opposition fighters. Besides airstrikes on civilians, the regime forces also carried out attacks using snipers, cluster bombs, and poisonous gas, the report said. The report also included figures of human rights' violations carried out by opposition groups fighting the Assad regime. The opposition was blamed for the deaths of at least 1,257 people, out of which 1,183 were said to be civilians, including 291 children and 242 women. The report also said that ISIS attacks in Raqqah, Hasakah, Aleppo and Deir ez-Zor claimed 3,557 lives, out of which 915 were civilians, including 132 children, 79 women, 11 activists and 2,642 opposition fighters. The Nusra Front also killed 124 civilians and 29 opposition fighters. The report also documented human rights' violations of Syrian Kurdish opposition groups, including the Democratic Union Party's (PYD) forced recruitment drive and arbitrary arrests. The PYD was blamed for the deaths of at least 110 people, including 102 civilians and eight opposition fighters. The U.S.-led international coalition airstrikes since December have killed 40 civilians, including eight children and six women in Raqqah, Deir ez-Zor and Idlib provinces. The report also said that 1,397 people died during various bombardments and illegal migration to overseas.