Cartoon world has double standard on freedom of speech issue 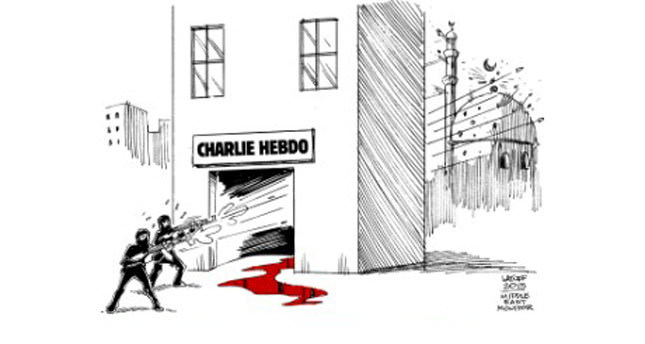 by Büşra Akın Dinçer Jan 09, 2015 12:00 am
The attack on the satirical French magazine Charlie Hebdo once again has raised the question of freedom of speech and of the press. The cartoon world, shattered by the attack, seems to have double standards regarding the answer.

Charlie Hebdo was known for its cartoons that mocked the Prophet Muhammed, and other religious figures, in different contexts that triggered angry reactions from Muslim communities for years. The offices of the magazine were petrol-bombed in 2011 as a reaction against the drawings of the prophet.

The incidents were seen as attacks on freedom of speech in western media, and Charlie Hebdo has become the image that sets the limits of freedom of speech. The magazine has always continued its provocative stance.

However, in 2008, French cartoonist Maurice Sinet, also known as Siné, was fired from Charlie Hebdo, where he had been working for 20 years, for his "anti-Semitic" cartoons, which were mocking the relationship of former French President Sarkozy's son with a wealthy Jewish woman. Siné sued the magazine Charlie Hebdo for defamation against those who accused him of being anti-Semitic.

Carlos Latuff, who has also received attention after his latest cartoon, described the effects of Charlie Hebdo attack on Islam. Latuff portrayed two gunmen aiming and firing at a Charlie Hebdo building, but behind that shooting at mosques. Latuff says that Islam is also the victim of the attack.

"A real tragedy. Nobody should be punished for ideas. I never agreed with the editorial line of Charlie Hebdo, but also won't support this kind of brutal reaction. No doubt, this is completely counterproductive and will backfire against Muslim communities all around Europe and abroad. The Zionists and right-wingers in general now have a good reason to bash Muslims and immigrants. Sure it will...change the lives of Muslims in Europe...changing for the worse."

Latuff said the motive behind the urge to mock Islam in a way that insults the sensitivities of the religion remains unknown.

"Who knows? Hatred against Muslims, testing the limits of freedom of speech, mocking Muslims just for fun, who knows? However, The fact is that they died not for a good cause, what could be seen as noble, but for provoking Muslims and feeding the hatred against Islam."