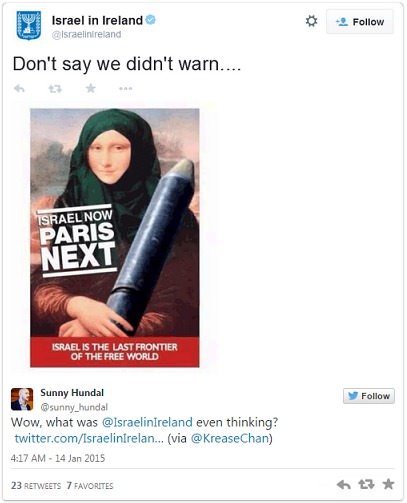 by Daily Sabah Jan 14, 2015 12:00 am
The Twitter account of the Israeli Embassy in Ireland posted a provocative tweet on January 12 containing an image of the "Mona Lisa", wearing a hijab and holding a rocket, then deleted it soon after.

The tweet, included the message: "Don't say we didn't warn...." stayed on the embassy's account for two days and drew instant criticism from Twitter users for spreading hatred and promoting Islamophobia.

After the reactions, an embassy spokesperson said in an email that they posted the image in the wake of last week's terror attacks in France "to symbolize the meaning of the Islamist terrorist attack on European and democratic values. However, because of abusive, vile and anti-semitic comments in response to it, we have decided to take the image down." 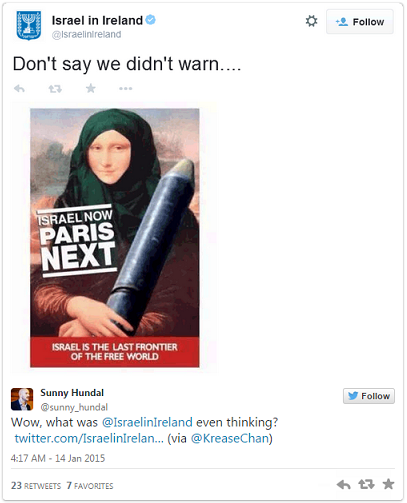 This is not the first time the account has posted such a provocative image. In July, an image of Michelangelo's statue of David wearing an Arab headscarf and with an explosive belt wrapped round its torso was posted. Accompanying the slogan were the words "Israel now, Italy next".

In December 2012 officials were also forced to remove a post on Facebook which said that if Jesus lived in the modern world he would "probably end up being lynched in Bethlehem by hostile Palestinians."
Last Update: Jan 15, 2015 9:58 am
RELATED TOPICS