Disabled boy plays the piano with his eyes 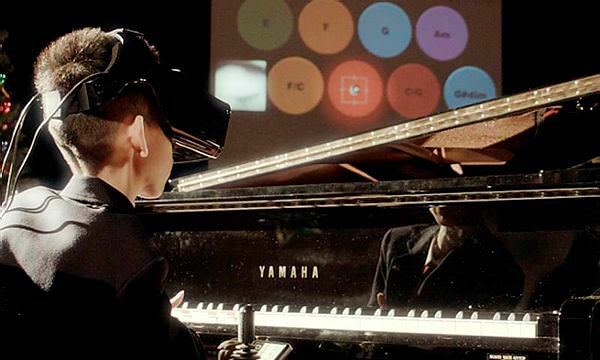 by Daily Sabah Jan 21, 2015 12:00 am
Japanese virtual reality company Fove and the University of Tsukuna's Special Needs Education School for the physically disabled have come up with a piano system that makes it possible for the disabled who can't use hands to play the piano. The system, named Eye Play the Piano, is pitched as a "universal piano" which children can play using eye movements.

One student, Kota Numajiri, used Fove's Eye Play the Piano system to deliver the recital for Christmas concert held on December 18, 2014 after four months of preparation. They used the system to deliver the recital and were accompanied by fellow students providing the vocals. Numajiri wore a Fove headset that tracks eye movement and using the blinking of his eyes to play the notes.

"This project was started in April of 2014," Fove representative Kojima said on the company's JustGiving page. "The idea of expression coming only from the actions of the human eyes does not only apply to playing the piano, but we also believe that this technology can open up many new possibilities to all humans. We believe that Eye Play the Piano is just the first step in moving forward. We ask for your cooperation in making this goal a realization."