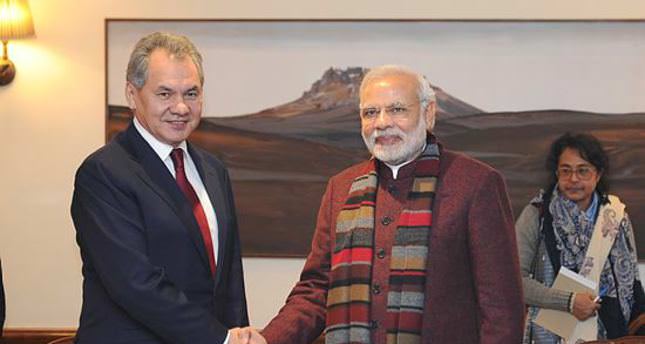 Russia, facing tough sanctions from the West, has expanded its ties with Asian countries, including sanction-laden Iran as well as India, which cooperates closely with Israel on security and military issues

With Russia's grip on Europe loosening, the country is now building closer ties with India as the two countries vow to boost military cooperation in combating terrorism and developing anti-terror strategies. After a series of major defense and energy agreements signed in December 2014, Russia-Indian bilateral relations have been moving forward ever since the election of India's new Prime Minister Narendra Modi. "Agreements reached at the top level open up new opportunities to develop cooperation between the defense agencies of Russia and India," Russian Defense Minister General Sergey Shoigu said, as reported by Russian state-run Itar-Tass news agency. "The course for building up diversified ties between our agencies remains unchanged," the Russian defense minister said, while seeking further cooperation with India.

India has signed a nuclear deal with Russia in order to build at least 10 more nuclear reactors. With Russia in search of export markets for its oil and gas, India has become a major Russian oil buyer. Russian oil producer Rosneft signed an agreement to supply India with 10 million tons of oil.

It is not only Russia that has become a major partner with India. Regarding Indian policy, the New Delhi government has tried to not be too one-sided, and has created a diplomatic balance with Russia one one side, and Israel on the other. Amid the Indian government's strategy to build ties with more partners, Israel-Indian relations have also been enhanced over the last year. India-Israeli cooperation increased dramatically in 2014, with $662 million worth of Israeli weapons and defense items being exported to India. Agriculture is another important sector for both countries, as the Indo-Israeli agricultural cooperation project helps India to build strategic ties with Israel.

Taking Russia's latest move in Asia into consideration, Russia has sought to expand its ties with more Asian countries in the face of Western sanctions. The Eurasian Economic Union (EEU), which entered into force on Jan. 1, aims to strengthen Russia's sphere of influence in the face of sanctions imposed by the European Union and the U.S. Putin's Russia considers the EEU as a powerful alliance that can rival the European Union under the presidency of Moscow. Russia is seeking more cooperation with ex-Soviet countries: Belarus, Kazakhstan, Armenia and the acceding country, Kyrgyzstan, in an effort to strengthen energy, defense and strategic ties in northern Eurasian countries and to help to revive Russia's economy, which was badly hit by U.S. and EU sanctions over the crisis in Ukraine.

Other than former Soviet countries, Iran has become another strategic partner for Russia, with Moscow and Tehran signing a military cooperation deal on Jan. 20, which implies wider collaboration in personnel training and increased counter-terrorism operations. Regarding the joint military cooperation, Iran and Russia share the same "analysis of U.S. global strategy, its interference in regional and international affairs and the need to cooperate in the struggle against the interference of foreign forces in the region," Iranian Defense Minister Hossein Dehqan said, AFP reported.